admin
More Celebrity News ►►
Ok Potter-heads gather round, because Rupert Grint aka RON WEASLEY said he could see Emma Watson and Tom Felton dating and I have officially lost all chill.
What’s up? It’s Emile Ennis Jr. here with Clevver News and Ron Weasley isn't trying to start anything, but he could definitely see Hermione Granger and Draco Malfoy dating.Ok well not exactly Hermoine and Draco but their real-life actor counterparts, Emma Watson and Tom Felton.
Rupert Grint, who we all know played Ron in the HP films, was asked by Entertainment Tonight about the Emma/Tom romance rumors that surfaced on social media back in August.In case you don’t remember what rumors I’m talking about, while there was no confirmation of an actual romance, Tom and Emma were seen spending a suspicious amount of time together.Tom posted this pic of him and Emma on Instagram, and while the picture alone would usually make my head spin, it’s the details that make the Dramione shipper in me almost explode.Allow me to break it down for you.First of all, they look extremely cozy together in South Africa while wearing their actual pajamas as Tom teaches Emma how to play the guitar.Which obviously sparked about a thousand more questions in my head like…Why were they in South Africa together? Were they working on another movie together? Or did they have a sleepover? Why else would they be in pajamas together? Who took the picture? Or was this a cute self timer moment?We never actually got confirmation of anything at that time, but we never stopped asking questions because both Emma and Tom are single.And now, Rupert said that he wouldn't be surprised if something did happen between them because of their Harry Potter days, though nothing is happening right now.Oh my gosh, I am going to take that as like half a confirmation. Rupert went on to explain the chemistry between Emma and Tom. And the Dramione shippers could not contain their excitement on Twitter.And this all gives me hope because in real life, both Emma and Tom have talked about their single status recently.Emma WAS spotted kissing a man in October but told Vogue UK in a more recent interview that she's not dating anyone currently.She is only really dating herself right now.Fans obviously took to Twitter to poke fun at this term.When Tom was asked about Emma’s now iconic self partnered line, he told the Daily Mail that quote, “I like it! It’s the first I’ve heard of it, but it’s great. I’m in the same category to be honest with you, quite happily self-partnered."
Ok so there was a lot of chatter online about this whole “self-partnered” thing.
But what does it ACTUALLY mean?According to a clinical psychologist, "self-partnering focuses on the ideal of being happy and complete as a solo individual. A self-partnered person would feel whole and fulfilled within the self and does not feel compelled to seek fulfillment through having another person as a partner."
BUT that doesn't necessarily mean that a self-partnered person doesn't date or doesn’t hope to get married someday. It's that they're taking the time to know themselves first.So there’s still hope for Emma and Tom, I definitely ship it.And Emma certainly isn't the first celebrity to shift what's traditionally viewed as a negative relationship status into a positive. In 2014, Gwyneth Paltrow used the term "conscious uncoupling" to describe her divorce from Coldplay lead singer Chris Martin.She received some heat for this term at the time, but I actually think it’s nice. They are able to co-parent their kids really well and it seems to work for them.Anyway, back to Emma and Tom.I mean we need a real life Harry Potter couple. I’ve been wanting that for like over a decade now. We are ready whenever you are Tom and Emma.
However; some fans are not on board with this ship. They are shipping other cast members with their beloved Emma.So, I’m going to turn it over to you, because I want to know what you guys think. Do you ship Emma and Tom? Or do you ship any other Harry Potter cast members? Also, what do you think of Emma’s coined term “self-partnered?”Potter-heads, share your thoughts down in the comment section below.
After that, why don’t you dive in to more Clevver News by hitting that subscribe button and click that bell so you don’t miss any of our new stories. Then click right over here for more entertainment news. Thanks for hanging out with me here on Clevver News, I’m Emile Ennis Jr. and have a great day.
For More Clevver Visit:
Find us on Facebook:
Keep up with us on Instagram:
Follow us on Twitter:
Tweet Me: 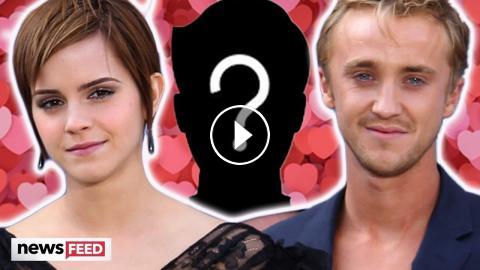 More Celebrity News ►► Ok Potter-heads gather round, because Rupert Grint aka RON WEASLEY said he could see Emma Watson and Tom Felton dating and I ha...