Instagram SHUTS DOWN The Kardashians, Cardi B & More From Posting Weight-Loss Products!

Added 5 months ago by admin
16 Views
More Celebrity News ►►
Jameela Jamil just won a MAJOR battle in her fight against all those weight loss products the Kardashians, Cardi B and more celebs have touted on their social medias!
Hey everyone, it’s Emile Ennis Jr. here with Clevver News and Jameela must be feeling pretty good today. Her relentless fight to get celebs to stop promoting unhealthy weight loss drinks just hit a massive milestone!
As we all know, Jameela has not been quiet about her dislike of weight loss and or cosmetic “wonder products.” In fact, she’s had some pretty brutal battles with some of the social media elite.
Not naming names, but…. You know who you are!
Now Instagram is finally standing with Jameela, and so many others, on the fact that this stuff is SUPER toxic.
Quick trip down memory lane... Back in November Jameela expressed her dislike for all the celebrities promoting these toxic drinky-poos!
She then took to Twitter to express that she’s not trying to cancel the celebs pushing the products, but rather the companies that make these products.
She wrote: “I definitely don’t want any woman canceled! I’m hardly perfect! We can all just wake up one day and decide to be more responsible and do better for women! I used to be really ignorant and misguided in my feminism, pretty slut shamey and backwards... we can ALL Change + do more”
On Wednesday, Instagram announced they will roll out a new policy that will prevent users under 18 years old from seeing ads from their fave celebs promoting diet pills, diet teas, appetite suppressant lollipops...honestly the list goes on.
Celebs and influencers will also be banned from claiming the products are “miracle workers” and saying they lost weight solely from the product and blah blah blah. You know, the typical lies celebs say to make major bank. So if you see a celeb saying she lost 30lbs from sipping tea, that stuff will now be banned.
Instagram also announced they will be rolling out a new feature where users can report anyone that breaks these new rules. And before you talk about censorship and stuff, remember only people under 18 won’t be able to see these ads and that’s a GOOD THING.
I mean, don’t you remember going through puberty? Wasn’t exactly a fun time. Now imagine having to see images of over the top models promoting products that could do more harm than good. Our feed will be grateful for the lack of diet and beauty ads.
The queen of false promotional clapbacks, Jameela Jamil recently caught up with Elle UK and was asked how she felt about the whole thing.
And let’s just say she had some pretty choice words.
“It sets the tone that this is not ok in our society.
We have hyper-normalised flogging nonsense to young impressionable people.
These people are selling hair growth gummies, but wearing extensions or photoshopping themselves to look slimmer and selling a weight loss shake.
There are so many lies being told and we’ve accepted that as a cultural norm.”
She didn’t just stop there though. She gave examples as to why this type of culture is especially toxic today and why these changes are so necessary. And how it could save some lives in the process.
“The issue is at its peak because, in my day, you'd have to search for ages to find this toxic information, but now it finds you because of algorithms that know your age, sex and what you're into. Therefore it's the worst it's ever been.
Teenage suicides, eating disorder rates, the amount having cosmetic surgery and committing self-harm - they are all at the highest they've ever been.
There's no way this isn't a correlation with what they're being exposed to online.”
Jameela has been super open about the toxic culture these ads create and the responsibility of celebs to not push this on young people. Famously she’s been in social media battles with the Kardashians, in particular that of Khloe, Kylie, Kourtney and Kim. While Jameela insists she doesn't hate the Kardashian clan, she just wants them to stop selling fake miracle products, she’s had some pretty vicious words for the sisters.
Instagram’s changes are already in effect as of September 18th, so open that app and check it out.
But I have to know...tWhat do you think about Instagram’s changes? Are you happy you won’t be seeing false ads, if you’re under 18, or do you like seeing what celebs are promoting? Are you Team Jameela or Team Celebs Promoting Diet Supplements? Let’s chat about it in the comments below!
While you’re there give the bell a ring and subscribe to our channel to stay up to date on everything celebrity news.
Thanks for hanging out with me, I’m Emile Ennis Jr. with Clevver News and I’ll see you next time!
For More Clevver Visit:
Find us on Facebook:
Keep up with us on Instagram:
Follow us on Twitter:
Tweet Me:

Instagram SHUTS DOWN The Kardashians, Cardi B & More From Posting Weight-Loss Products! 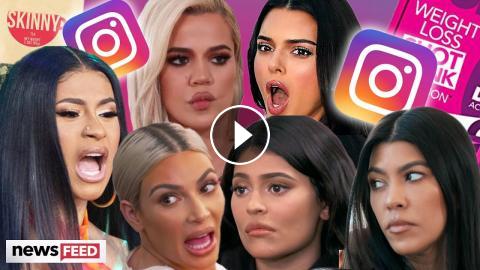 More Celebrity News ►► Jameela Jamil just won a MAJOR battle in her fight against all those weight loss products the Kardashians, Cardi B and more cel...