ava
After unsuccessfully convincing David Blaine to form a performance duo, James Corden attempts to beat David at his own game and use balloons to fly from the roof of CBS to the parking lot before David can complete "Ascension," flying him over New York City. Learn more about David's Aug. 31 performance: https://www.youtube.com/watch?v=4D9CBvePS3Q 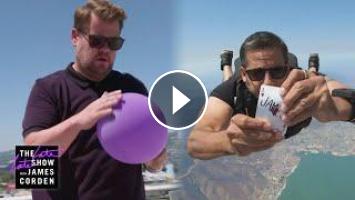 After unsuccessfully convincing David Blaine to form a performance duo, James Corden attempts to beat David at his own game and use balloons to fly fr...