ava
James Corden is excited to announce a winner from the first night of the #CordenStarbucksCup challenge, and immediately becomes stumped trying to locate the new location for the hidden cup of Night 2 of the challenge. Any viewer who spots the cup can take a photo and share it on Instagram or Twitter, tagging The Late Late Show and using the hashtag #CordenStarbucksCup. One lucky winner each night will win a Starbucks gift card and Late Late Show swag! Rules, terms and conditions here: https://www.cbs.com/recommended/news/1010099/the-late-late-show-with-james-corden-spot-the-starbucks-holiday-cup-official-sweepstakes-rules/ 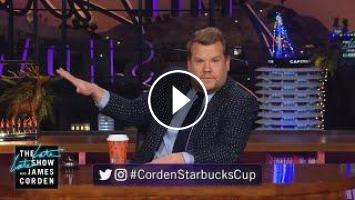 James Corden is excited to announce a winner from the first night of the #CordenStarbucksCup challenge, and immediately becomes stumped trying to loca...