admin
JOIN & Receive celebrity SHOUT-OUTS and receive celebrity perks:
Jana Rosenberg is going on a La La Land Bus Tour with Bryce Vine! In celebration of the release of "Carnival", Hollywire took a bus tour with Bryce to all his favorite LA spots. But first, we chat with Bryce about the new album, collaborating with YG for his hit song "La La Land" and of course... what he looks for in his "Drew Barrymore.
Bryce Vine is an American singer and rapper from Los Angeles. Bryce has showed an interest in music at an early age. He made his first step into the career in 2011. He auditioned for The Glee Project, where he finished as one of the twelve finalists. From here, Vine studied at the Berklee College of Music, where he met his producer, Nolan Lambroza. With Lambroza, Bryce released two EP's - Lazy Fair and Night Circus - which have a combined total of over 16 million plays on streaming services and have received numerous acclaim from critics. Vine is currently signed with Sire Records and released his debut full length album Carnival this past July, which features the hit songs La La Land and Drew Barrymore.
#BryceVine #BryceVineInterview #LaLaLand
Become a Hollywire member and receive perks
Subscribe
About Hollywire:
Welcome to Hollywire official YouTube channel! Hollywood’s most popular celebrity interviews and trendiest source for lifestyle entertainment!
Hollywire 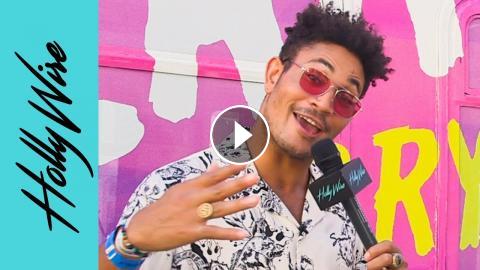