ava
James Corden welcomes GRAMMY-nominated musician Madison Cunningham who shares what she's looking forward to returning to and what inspired her hit song "Broken Harvest," for which she shares a special performance. 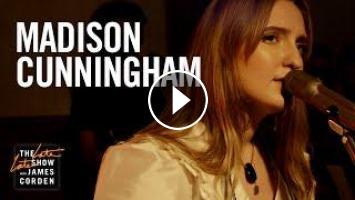 James Corden welcomes GRAMMY-nominated musician Madison Cunningham who shares what she's looking forward to returning to and what inspired her hit son...