Added 1 week ago by admin
14 Views
More Celebrity News ►►
The Pete Davidson and Kaia Gerber dating timeline has officially taken a back seat after the new year as Pete is said to be focusing on his mental health.
What’s up guys, it’s Sussan Mourad back here on Clevver News, and it looks like Pete Davidson and Kaia Gerber are taking some time away from their relationship…
Let’s face it; it’s a new year and a new decade, which means priorities change and new goals are set.
That said, Pete’s priorities are shifting from working on his relationship with girlfriend Kaia Gerber to bettering a relationship with himself.
A source revealed to E! News that Pete is QUOTE, “taking a break to work on his mental health,” which can only mean that his relationship with Kaia may have to be put on hold for the time being.
According to the source, QUOTE: “It became very clear that he had to go and do this and couldn't wait any longer. This is his second time seeking treatment, his first being in 2016.”
The news doesn’t come as that much of a surprise considering Kaia’s parents, supermodel Cindy Crawford and Rande Gerber, intervened in the couple’s relationship late last year.
During the holidays, Kaia’s family was spotted in an intense conversation outside of her apartment in New York City, which Pete was later seen leaving.
There wasn’t much speculation of a split at the time, as sources noted that Kaia’s parents were trying to “guide Kaia and help Pete through a difficult time.”
And just days after the ‘intense chat’, Pete appeared on SNL and joked that he was “going on ‘vacation’ but insurance pays for some of it, and they take your phones and shoelaces. It costs $100,000 but I still have roommates.”
In case you’re wondering what type of ‘vacation’ Pete was referring to, there were some fans who immediately caught on to the fact that he was hinting at rehab, considering he’s been pretty open about his struggle with mental health in the past.
Since the big-discussion-gone-public, Kaia and her parents have returned to LA, where there has been no sighting of Kaia and Pete together.
This whole situation, however, seems like the healthiest breakup scenario possible, considering Pete seems to have confided a lot in Kaia’s family.
Although we’re unsure whether the family played a large or small role in Pete’s decision to focus on himself, the current situation seems much more under control.
Another source revealed that Pete is in a program, which makes for very little contact between he and Kaia.
The same source also added that Kaia QUOTE, “doesn't know if she wants to continue in their relationship, especially since she wasn't comfortable with what she saw and doesn't know if she can handle it.”
Their future is clearly now up in the air as the insider revealed, QUOTE: “What she saw happen with Pete was very concerning and scary for her... She cares about Pete and wants him to get better.”
Pete is also very understanding of the situation and “knows he needs to focus on his mental health.”
It’s no question we could all use a little inner-TLC at times, and Pete seems to be very self-aware of his needs, so we can only commend him for that.
But while Pete takes some time away on ‘vacation’ as he said, Kaia is also enjoying a little vacation of her own.
Kaia has been flying solo over the weekend in Miami sans Pete and soaking up the sun with Queer Eye star Antoni Porowski and 13 Reasons Why actor Tommy Dorfman.
The next day, Kaia was seen hanging out with her mom, who seems to have paid her a visit in Miami as well.
But the main reason for Kaia’s vacay was likely due to the photoshoot she was photographed posing in on Monday .
She also posted a bikini photo of herself laying on a hotel bed with the caption, “excessive charging.”
Ok, so not sure if she’s alluding to needing a life-recharge orrrr the Apple chargers laying on the nightstand next to her. Either way, we totally understand.
Pete and Kaia were first linked back in October after his breakup with Once Upon a Time in Hollywood actress Margaret Qualley.
All in all, Pete seems to be in great spirits and we’re rooting for his happiness, so this small break might just be exactly what he needs to conquer 2020!
That said, I wanna know what you guys think of Pete’s decision to focus on his mental health? And do you think he and Kaia still have a shot together in the future?
Get to talking down here in the comments, and then click right over here to check out another new video and don’t forget to subscribe to our channel for all the latest news updates. Thanks so much for hanging out, I’m your host Sussan Mourad and I’ll see ya next time.
For More Clevver Visit:
Find us on Facebook:
Keep up with us on Instagram:
Follow us on Twitter:
Tweet Me: 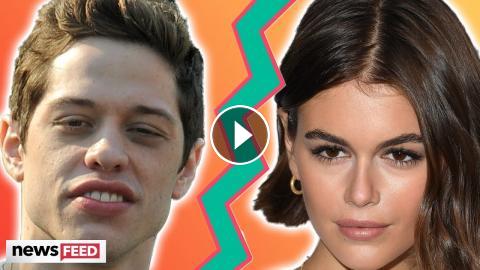 More Celebrity News ►► The Pete Davidson and Kaia Gerber dating timeline has officially taken a back seat after the new year as Pete is said to be foc...