ava
James Corden connects with Russell Crowe, who is spending quarantine in the Australian bush on his farm. After James asks Russell about his experience making "Gladiator" 20 years ago, the two talk about his new film, "Unhinged." And Russell shows James a GRAMMY he won in auction that was awarded to Johnny Cash, Roy Oribson, Jerry Lee Lewis and Carl Perkins for "Class of '55," and he recalls the night Ed Sheeran had the idea to have shots out of it. 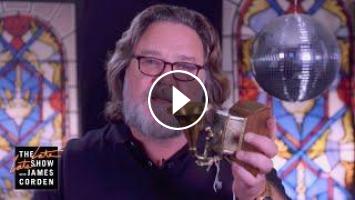 James Corden connects with Russell Crowe, who is spending quarantine in the Australian bush on his farm. After James asks Russell about his experience...