ava
James Corden welcomes Sean Lennon and Charlotte Kemp Muhl, and the two discuss recording a song for "Angelheaded Hipster: The Songs of Marc Bolan & T. Rex," and the legacy of Marc and the band. After, James asks them about their relationship with legendary music producer Hal Willner who passed away in April, and the two remember him as a one-of-a-kind artist with a special ear for music. 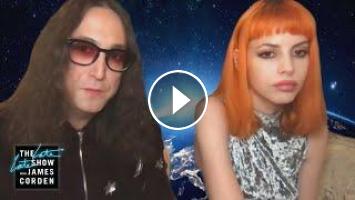