admin
More Celebrity News ►►
Selena Gomez went from singing her emotional song Lose You To Love Me to saying boy bye REAL quick in her surprise drop of ‘Look At Her Now.’ Sel also addressed the backlash Hailey Bieber has been receiving since her song dropped. We’ve got all the tea for you right here so don’t go anywhere.
What’s up? It’s Emile Ennis Jr. here with Clevver News and it feels like I’ve hardly even had time to process her first new song, but Selena Gomez is out here delivering even more music.I guess she is making up for lost time right now because sis isn’t wasting a second. And I have to say, I am here for it. And like Lose You To Love Me, her new song, Look At Her Now seems to make plenty of references to her exes. But this time, rather than being an emotional ballad, Selena is serving up an empowering BOP.A BOP i’m going to learn the choreography soon! And of course, we are here to break down and decode the lyrics for you. Let’s quickly recap the lyrics of Lose You To Love Me and get into why we think Look At Her Now may also be about her exes.
Many fans thought Lose You To Love Me was about Selena’s long time on-again-off-again relationship with Justin Bieber.She references a singer, name drops Justin’s album Purpose, and even calls out the two month time period in which Justin moved on from Selena to Hailey. So yeah, I think it is safe to say it at least had SOMETHING to do with Justin along with some of her other exes.But now we have a whole new song to decode and the lyrics are equally intriguing.Let’s start from the top with the first verse, which is just packed with info.
There’s a lot to break down here.First off, Selena and Justin were most recently dating in the summer and they were MOST definitely each other's first "real" relationship. All of that is pretty crystal clear.And then things get a little less clear, but a lot more interesting. Does Selena kinda, sorta shade Justin for cheating?Well, these lyrics certainly seem to be alluding to that. And we know there have been some rumors of Justin allegedly cheating, at least according to Taylor Swift's twitter likes. But wait there's more. Let’s keep going.Selena goes on to sing quote, “Fast nights that got him / That new life was his problem / Not saying she was perfect / Still regrets that moment / Like that night / Wasn't wrong, wasn't right, yeah / What a thing to be human / Made her more of woman”
I mean whether or not this is about Justin, it definitely seems like one of Selena’s exes betrayed her and made her well… more of a woman. In the song Selena dusts off the romance and sings quote, “Of course she was sad / But now she’s glad she dodged a bullet.”She is serving up subtle shade and I am loving it.And as I’m sure you imagined, fans are going just as crazy over all of this as we are. Twitter is all about this song and decoding these lyrics.And while we’re speaking about the album for a second, we still don’t actually have the album title, though we have two of the tracks. Hopefully Selena will drop that info soon because I am ready for this whole era.Nothing can bring our girl down. Not even possible hate from the one and only Hailey Bieber.
As we’ve been reporting, right after midnight when Selena’s song Lose You To Love Me came out, Hailey posted a cryptic screenshot of the song “I’ll Kill You” by Summer Walker.
It had us all wondering if it was just an innocent coincidence with very unfortunate timing or if it was a not-so-subtle message towards Selena?And now Selena seems to be speaking out about this matter too.And you know what they say about Selena...
Yep, that pretty much sums it up. Because Selena seemingly low-key defended Hailey during a recent Instagram Live. Yes you heard that right. Selena is defending the woman who is the wife of her ex because she is a classy queen and won’t stand for online bullying. She started off by saying quote, “I am so grateful for the response of the song. However, I will never stand for women tearing other women down.” Sel continued to explain that no matter what the situation, it’s never ok to be mean to others.
And finally, Selena added quote, “Please be kind, I don't like seeing people being disrespectful or rude to other people, so please don't do that."I mean, just when you think it isn’t possible to love Selena any more, she just keeps getting better.It’s unclear if Selena reached out to Hailey directly, but either way we completely agree with everything she said and think this was a great move. But I want to know what you guys think.
For More Clevver Visit:
Find us on Facebook:
Keep up with us on Instagram:
Follow us on Twitter:
Tweet Me: 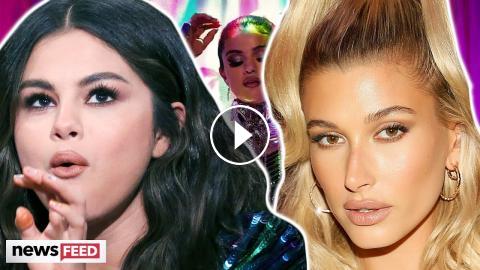 More Celebrity News ►► Selena Gomez went from singing her emotional song Lose You To Love Me to saying boy bye REAL quick in her surprise drop of ‘Loo...