ava
James Corden recaps an exciting day of conference championship football on a special episode of The Late Late Show. James recaps the highs and lows from the games, starting with Buffalo's loss to Kansas City, which included quite the skirmish, and ending with the day's first game, featuring Tampa Bay beating Green Bay, sending 43-year-old Tom Brady to his 10th Super Bowl. 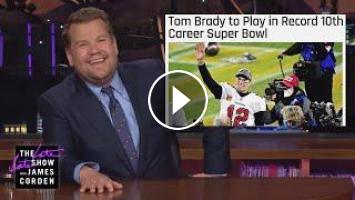 James Corden recaps an exciting day of conference championship football on a special episode of The Late Late Show. James recaps the highs and lows fr...