The BTS Army DRAGS Sofia Carson Over Her Cover Of 'BWL'

What’s up guys? It’s Sussan Mourad here with Clevver News and if you were watching the ARDYS, you definitely saw Sofia Carson’s show opening song medley.
She performed hits like Maren Morris’ “The Middle”, Taylor Swift‘s “Me!” and BTS’s “Boy With Luv.”
It was fun and definitely fit the vibe of the Ardys.

Some people were totally here for the medley, because hey who doesn’t love a good mashup of all your favorite songs? But others had mixed feelings about the performance, specifically the BTS Army.

And let’s just say, if there’s one fandom you don’t want on your bad side, its ARMY.
Love you guys.

But basically, they do not think Sofia included BTS in the medley for the right reasons.

Some BTS fans seem to think that Sofia just latches on to BTS for clout.

ARMY is specifically referencing a moment at this year’s Billboard Music Awards when the actor posed with the group, which some fans thought had taken the group by surprise.
This is the moment when she hopped in their pic, so you can be the judge…
One person said quote, “I don’t like talking shit... but this is the same Sofia Carson that jumped into the BBMA photo with BTS and held onto Hobi. Still trying to get those scraps I see.”
And another said quote “First she invites herself on their group red carpet picture and now this.”
But some BTS fans came to Sofia’s defense. Not everyone had a problem with her including their song in her tribute, because hey, it is one of the biggest songs in the world right now.

A fan wrote quote, “it confuses me because when sofia carson took a picture with bts because she was a fan y’all got mad and said it was for clout, and when she did a cover of their song proving even further that she is a fan y’all got even more mad? so what’s going on here”
And another said quote, “I think some armys are being harsh on Sofia Carson, I understand y'all are upset of what happened at the bbmas but bashing her and trending her name is not acceptable. Yes some of the memes are funny but at a certain point it's getting out of hand and ya'll need to tone it down.”
Which I can agree with. Whether or not you like her cover of Boy With Luv, hating on someone isn’t gonna solve any problems.
Of course it’s totally great to defend our BTS boys, but there’s no need to be disrespectful to make the point.

Alright guys, now I want to hear from you.
What did you think of Sofia’s performance? And do you think people are being too hard on her?
Let me know what you think in the comments section below, but keep it civil down there people.
And hold up… have you subscribed to Clevver? Come on what are you waiting for? Join the Clevver fam by clicking that subscribe button and then check out another new video right over here and be sure to click that bell so you never miss an update. Thanks for hanging with me here on Clevver News, and I’ll see you next time.
For More Clevver Visit:
Find us on Facebook:
Keep up with us on Instagram:
Follow us on Twitter:
Tweet Me:

The BTS Army DRAGS Sofia Carson Over Her Cover Of 'BWL' 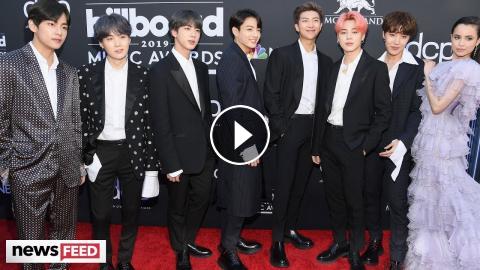