admin
More Celebrity News ►►
Jeffree Star and Kat Von D used to be the best of friends, but things quickly went south when the makeup artist cut ties with the YouTube star for his QUOTE “inappropriate behavior (including, promoting drug use, racism, and bullying).” The 32-year-old eventually fired back and the former besties got into one of the most heated feuds of 2016. It’s been two years since the original disses occurred, but neither party is quite ready to let it die.
Last week, KVD posted a video from her wedding on YouTube and someone commented QUOTE “Jeffree Star is watching this right now.” She responded QUOTE “Jeffree who?” and added a wink face.
The YouTuber responded in his video called “FULL FACE OF BRANDS THAT HATE ME,” which was uploaded on July 17. He mentioned that Kat promised to pull her liquid lipstick shade ‘Jeffree’ from stores when she initially ended their friendship, but has failed to do so both in Sephora and on her personal e-commerce site.
He said in the video QUOTE “If we all remember in Kat Von D’s video about me she said that she would be removing the ‘Jeffree’ liquid lip from Sephora and her website. Well we just logged onto KatVonDBeauty.com which is her personal website and you can click right now and still buy the ‘Jeffree’ lipstick. The fact that you are the face of the brand and your names on the packaging and you couldn’t even get my shade taken down… Can’t relate. I own my own company.”
But the drama didn’t end there! Jeffree then took to Twitter to continue calling out the tattoo artist, saying QUOTE “I couldn’t imagine making up lies about someone and trying to ruin their life, but still wanting to make a profit of their name 2 years later… can’t relate.”
He also shaded her for not planning to vaccinate her unborn child. He tweeted QUOTE “Here is an actual picture of Kat Von D's baby when it found out they weren't getting vaccinated.”
Will the Jeffree Star-Kat Von D feud ever end? Honestly, I don't think so. What do you think? Whose side are you on? Tell us your thoughts in the comments below. I’m your host Ava Gordy thanks so much for watching Clevver. Please Click to the right to watch another new Video and don't forget to subscribe to our channels.
For More Clevver Visit:
There are 2 types of people: those who follow us on Facebook and those who are missing out
Keep up with us on Instagram:
Follow us on Twitter:
Website:
Add us to your circles on Google+:
Tweet Me: 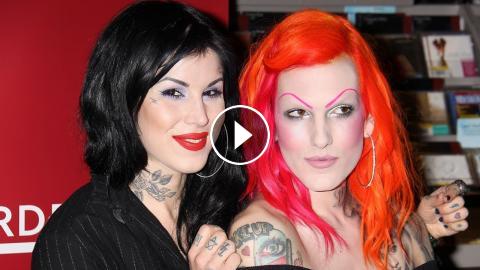 More Celebrity News ►► Jeffree Star and Kat Von D used to be the best of friends, but things quickly went south when the makeup artist cut ties with t...