Jeffree Star RESPONDS After Kim Kardashian Apologizes For Defending Him

admin
More Celebrity News ►►
Just to catch you up to speed, this whole thing started when Jeffree called out Kim’s attempt to swatch her new powder contour set. He commented on her post, “Umm... Kim what is going on with those new swatches?? Looks like chalk.”
This lead to Kim’s fans going after Jeffree, which lead Kim to defend his comment. Of course, doing so was interpreted as Kim acknowledging the racist comments Jeffree made in the past, which her fans were NOT happy about. This lead to Kim apologizing for defending him, which now leads us to Jeffree’s Twitter rant.
Jeffree vented on the Kim drama, writing QUOTE, “Every news and media outlet in the world has emailed and called my office all day asking me for a Kim. K quote.. Please f--k off. Talking about makeup has turned into a blood bath since yesterday. WAKE UP. THERE ARE MORE IMPORTANT THINGS 2 WORRY ABOUT.”
He followed that up with QUOTE, “I get that people love drama and feed off of it, but attacking ME with hate and disgusting comments doesn't fix anything. You can't call me something that I'm not.”’
And finally he concluded the tweets with QUOTE, "HEY HATERS: Instead of tweeting me...try fighting for something important. Because with how dark and depressing America is right now, I don't think I'm important. Stop wasting time on gossip and focus on reality. If you're upset about Jeffree Star and contour swatches and makeup drama, get the f-ck out of my mentions. You're wasting your own time."
Okay guys now I wanna know what you think of Jeffree Star’s comments, so sound off with your thoughts in the comments below, and after that click here to watch kim's apology. Thanks so much for hanging with me on News Feed, I’m your girl Sinead de Vries and I’ll see you next time!
For More Clevver Visit:
There are 2 types of people: those who follow us on Facebook and those who are missing out
Keep up with us on Instagram:
Follow us on Twitter:
Website:
Add us to your circles on Google+:
Tweet Me:

Jeffree Star RESPONDS After Kim Kardashian Apologizes For Defending Him 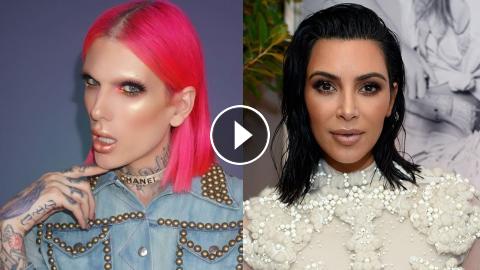 More Celebrity News ►► Just to catch you up to speed, this whole thing started when Jeffree called out Kim’s attempt to swatch her new powder contour ...