admin
More Celebrity News ►►
Stop what you’re doing because Cynthia Nixon AKA Miranda from Sex and the City is RUNNING FOR GOVERNOR!
You probably know Cynthia Nixon as the high-powered cynical, but caring lawyer Miranda Hobbes on HBO’s Sex and the City.
While still acting on Broadway, she has also become quite the activist fighting for issues like LGBT equality, public education, and reproductive rights.
And as of today, Monday March 19th she has announced on Twitter her campaign for governor of New York!
Now she’s really not gonna have time for that Sex and the City 3 everyone’s been asking for.
In a beautiful video announcement she talks more about her platform to better the public school system, end mass incarceration, and fix the subway system amongst others.
It was so good, it had me tearing up at the end. You go, Cynthia!
Of course, the reactions were the greatest part.
One person tweeted QUOTE, “y'all ignored her oscar-worthy performance so cynthia nixon went "f*ck it, i'm gonna fix new york!"
And another simply screengrabbed a still of Miranda running and said QUOTE, “she’s running”
She will be running against Governor Andrew Cuomo in the Democratic Primary, and if she wins she will be the first female and the first openly gay governor.
Which is awesome as heck. Once again, you go, Cynthia!
Okay guys what are YOUR thoughts on Cynthia Nixon running for governor? Get the conversation going in the comments section, and then click right over HERE to get the details on Facebook's data scandal? Don’t forget to subscribe to Clevver News - I’m your host Ava Gordy and we’ll see you guys next time!
For More Clevver Visit:
There are 2 types of people: those who follow us on Facebook and those who are missing out
Keep up with us on Instagram:
Follow us on Twitter:
Website:
Add us to your circles on Google+:
Tweet Me: 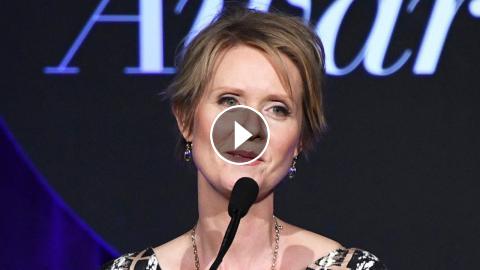 More Celebrity News ►► Stop what you’re doing because Cynthia Nixon AKA Miranda from Sex and the City is RUNNING FOR GOVERNOR! You probably know Cynth...