Don’t mess with the Arianators! Ari has been accused of talking behind some of her fellow musicians’ backs, such as Selena Gomez, Demi Lovato and ShawMila but it looks more like a case of sabotage! What’s up? It’s Sussan Mourad here with Clevver News and some alleged screenshots” of Ariana Grande’s alleged direct messages with a blog have been circulating on the Internet.And before we get into what these screenshots say, there’s no proof that these screenshots are legit. We are certainly stirring up any drama between Ari, Sel and Demi… we are just reporting what is circulating and how the internet has been interpreting it! Someone could easily be messing with Ariana and creating fake messages to put out there, so guys please don’t @ me - we’re just doing our job on reporting. But promise, we’re gonna get to the bottom of all this here together.And according to these screenshots, Demi and Selena weren't the only ones that Ariana allegedly “dissed” during the chat. Apparently she shaded Shawn Mendes, Camila Cabello, Khalid, Ed Sheeran, Jake Paul and Tana Mongeau.Alright, so now that we’re done with the content of the screenshots, I’m not going to give them any more of my energy because the entire internet thinks this whole convo is fake.Personally, I don’t really think Ari would ever be messaging bloggers like this, she seems way above this kind of gossip and drama. Also the language of the messages, is NOT very ariana lingo! But let us let the internet explain why they think these messages are a fraud.Starting with Twitter fans who totally think these screenshots are photoshopped.This fan tweeted saying quote, “ZOOM IN. its fake. the only thing they can prove real is the audios. And there she only talked about her events. the rest might be edited. bon apetit”And we watched that entire video slowly and can confirm the messages in the screenshots from earlier are NOT anywhere in that video from what we can see.But another eagle eyed fan pointed out something else that’s pretty important in figuring out that this likely wasn’t Ari.And if you’re a Arianator, you would’ve caught this right off the bat.
Obviously, neither Ariana nor anyone on her team have spoken out about this, but the internet seems to have done that for them.And Ariana seems too busy to even care about these rumors.Over the weekend, According to TMZ, Ari was allegedly spotted out at a bar in Northridge, CA kissing a mystery man. She was rocking her iconic ponytail and a white sweatshirt as she was seen kissing her suitor in a booth.According to TMZ, Ariana and her friend only stayed at the bar for about 30 minutes, but it clearly wasn’t her rumored flame Social House’s Mikey Foster.TMZ also reported that Ari rolled into the bar around 1 AM with a crew of friends, including the guy from the booth. And it's still unclear who this guy is. TMZ said he wasn’t instantly recognizable, which isn’t exactly helpful. But either way, we’re just glad to see Ari out and about, not letting the haters or the photoshoppers get her down.I want to know what you guys think about all of this though.What do you think is the deal with these alleged messages? And do you have any theories?Let me know down in the comments below.Then be sure to hit that subscribe button, click that notification bell and then move your cursor right on over here to check out another new video. Thanks so much for hanging out with me here on Clevver News, I’m Sussan Mourad and I’ll catch you next time! 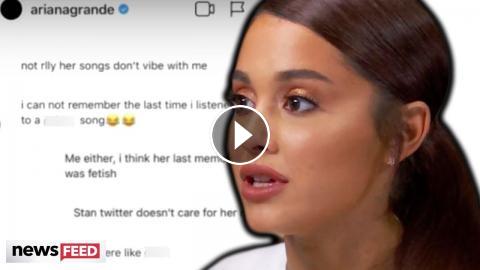 More Celebrity News ►► Don’t mess with the Arianators! Ari has been accused of talking behind some of her fellow musicians’ backs, such as Selena Gome...