admin
►SUBSCRIBE for 2 new videos per week:
►T-shirts and caps available now:
Since the first time I visited Ethiopia, I had wanted to visit the ancient city of Harar. On this trip, we had a chance to visit, a very short trip just for one full day, but we made the most of the day and crammed in as much street food and exploring as possible. It was one of the overwhelmingly incredibly days - a day I’m still processing now - the food, the people, the hyenas, WOW!
Dire Dawa, Ethiopia - We landed early in the morning in Dire Dawa, the closest city airport to Harar, to begin this street food tour.
Al-Hashimi Sweets - This is the most well known legendary sweets shop in Dire Dawa. They have a number of different sweets, but we tried their baklava, which was excellent.
Price - 20 ETB ($0.71) for everything
Next in Dire Dawa we stopped at a stall near the bus station to eat some Ethiopian street food breakfast. We ordered ful, mashed fava beans with tuna, and eggs, all served on a communal platter with bread. It was delicious, and cooked right before our eyes. All the ladies were so nice and friendly.
Price - 120 ETB ($4.30) for everything
Harar, Ethiopia - It was about an hour drive from Dire Dawa to Harar, but a beautiful drive through the mountains. Harar is an ancient walled city, a maze of back alleys and walking footpaths. We arrived to Harar, dropped off our stuff at the guest house, and continue on exploring. It happened to be Ramadan when we were in Harar, and Harar is a predominantly Muslim city. So we had a chance to stop by a few places where they were preparing food in large quantities. It was amazing to see and smell.
For our first lunch we stopped at a local restaurant that Hailu took us to. Along with a spread of Ethiopian food, one of the main dishes we got was gomen besiga, which is a type of collard greens with meat. It was incredibly good, as was the dulet.
Price - 165 ETB ($5.92) for everything
Harar is one of the cities that everywhere you look, there’s something fascinating and interesting happening. We walked around the markets, explored the walled city for a few hours, and snacked on some street food.
Iftar is the evening meal to end the daily Ramadan fast, and we were invited to participate in the meal with our host family at our guest house. The house was beautiful, traditional Harar Ethiopian style. Along with a bunch of different fried snacks, the main dishes of the evening meal were fenugreek stew with injera and barley soup.
Hyena Man - One of the legends of Harar is the hyenas, which go back hundreds of years, believed to chase out evil spirits and enemy, as well as the hyenas playing a role in the Harar culture. One of the edge of town, in the middle of darkness, the hyena man feeds wild hyenas camel meat. Sitting on a rock, hyena on my back, face to face with a giant hyena, was undoubtedly one of the scariest things I’ve ever done.
Fatira - Finally to end this amazing day of Ethiopian street food and attractions in Harar, Dessie and I had a fatira.
Total price (for 2 and drinks) - 120 ETB ($4.30)
Thanks to Go Addis Tours () for arranging this trip for me. Note: I paid for this tour, but I highly recommend them - they did a great job. And Dessie and Hailu were fantastic!
►Hotel I stayed at in Addis Ababa:
MUSIC:
***CAMERA GEAR*** I used to make this video (these are affiliate links):
Main camera:
Main lens:
2nd lens:
Microphone:
Drone:
I would love to connect with you!
Instagram:
Facebook: 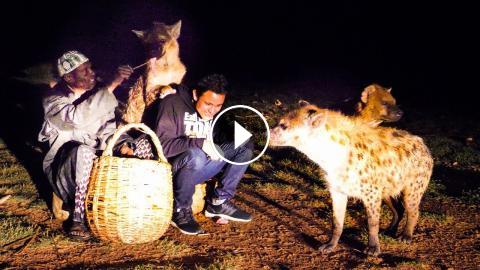 ►SUBSCRIBE for 2 new videos per week: ►T-shirts and caps available now: Since the first time I visited Ethiopia, I had wanted to visit the ancient cit...