ava
One of the three things that lifted James Corden's spirits yesterday was a video of a familiar-looking man in front of a familiar-looking home playing the saxophone for his neighbors. That man is James's father, Malcolm Corden, and James takes a few minutes to catch up with his Dad and Mother, Margaret, in their home in High Wycombe. 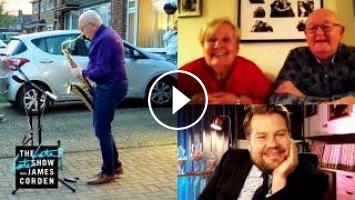