admin
More Celebrity News ►►
Lorde gets SLAMMED for an insensitive Whitney Houston bathtub joke, and quickly issues an apology.
This is definitely not the kind of tone deaf stunt we’d expect from Lorde.
21-year-old Lorde, whose real name is Ella O’Connor, posted a since-deleted Instagram photo of her bathtub being filled with water and captioned the pic, "And iiii will always love you," which is obviously a lyric from Whitney Houston’s iconic song, "I Will Always Love You."
You’ll recall that Whitney tragically died by accidentally drowning in a bathtub in a Los Angeles hotel room, back in 2012. Her drowning was sadly the result of heart disease and years of substance abuse. Whitney’s daughter, Bobbi Kristina, died in a similar way just three years later.
Fans immediately slammed Lorde for the insensitive post, with one fan Tweeting QUOTE, “hey @lorde uh might not want to post a picture of a full bath tub with a Whitney Houston lyric. feels a bit insensitive since Whitney died in a bathtub”.
Another wrote QUOTE, “Y'all. Lorde just made a Whitney Houston bathtub joke. I would say cancel her, but canceled folks just end up being more successful in the long run.”
And one fan praised Whitney while condemning Lorde’s actions Tweeting QUOTE, “Whitney was a legend. she was amazing. she was a queen. she was a strong black woman. I like lorde but this is truly disgusting”.
Of course, there were a few fans that came out to defend Lorde, noting that it was possible that Lorde was acting on ignorance, rather than trying to make a crude joke. One fan wrote QUOTE, “Ok...anyone who's getting on lorde for this whitney houston thing right now is just wanting to start drama. like of COURSE she wasn't trying to reference her death?? she's only 21 and probably doesn't even KNOW the details as she was a child when it happened, I sure as hell didn't”.
An hour after she posted the offensive picture and caption, Lorde deleted it and issued an apology on her Instagram Story, that read QUOTE, “Extremely extremely poorly chosen quote. I'm so sorry for offending anyone — I hadn't even put this together I was just excited to take a bath. I'm an idiot. Love Whitney forever and ever. Sorry again.”
So it definitely sounds like Lorde didn’t realize what she was doing when she made the post, and we’ll take her word for it because this is very out of character for her.
But how about you guys? Do you think Lorde should be forgiven for the mistake, or are you still upset that she didn’t put two and two together when she made the post? Sound off with your thoughts and feelings in the comments below, and after that click right over here to check out our Coachella fashion episode of beauty trippin! And don’t forget to hit that subscribe button! Thanks so much for joining me on News Feed, I’m your host Naz Perez and I’ll see you next time!
For More Clevver Visit:
There are 2 types of people: those who follow us on Facebook and those who are missing out
Keep up with us on Instagram:
Follow us on Twitter:
Website:
Add us to your circles on Google+:
Tweet Me: 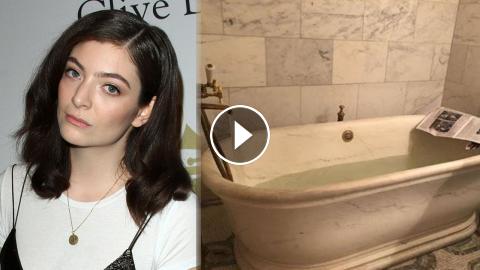 More Celebrity News ►► Lorde gets SLAMMED for an insensitive Whitney Houston bathtub joke, and quickly issues an apology.This is definitely not the ki...