admin
Celebs That Should Have Own Reality Show ►►
More Celebrity News ►►
Me oh MILEY, what an EPIC start to the 41st season of Saturday Night Live, and you bet your dead petz that SNL host Miley Cyrus has delivered one HELL of a performance
And from her opening monologue to her not-so-safe-for-work skits throughout the show, Miley sent us all through a wave of emotions from a state of laughter to shock, and even tears.
But a Miley SNL monologue just wouldn’t be complete if the first line out of her mouth wasn’t weed-related right? She kicked the night off on a “high” note, literally, by poking some fun at her minor delay…
She then sang a version of Frank Sinatra’s “My Way” saying goodbye to the people or things that made the summer of 2015 one for the books. SNL cast members were dressed as people who may have stirred up some controversy, including the dentist who killed Cecil the lion, Meek Mill and Drake post-feud, Lenny Kravitz’ junk and yeah, even the doughnut that Ariana Grande licked.
Another memorable Miley moment was during her ‘50s dance skit, where her and a few cast members channeled Grease-inspired looks, playing high school students at a dance where they sang about what they looked for in a partner, when Miley’s innocent character dropped this bomb…
And we don’t expect anything less. She then proceeded to prove that she will go all the way, and by all the way, I mean licking frosting off the face of her crush, because well, MILEY.
In Miley’s next stint, she took a break from the acting to perform one of her hits off of her Miley and Her Dead Petz album called “Karen Don’t Be Sad”, where she wore a full length wig and floral vines covering her not-so-private areas.
Another skit featured Miley rocking a blue and purple wig with a group of cast members, as they resembled a few Millennials poking fun at the treacherous addiction that is social media.
And finally, the moment that brought us all, including Miley herself to tears, was her last performance of “The Twinkle Song” in which she paid tribute to her deceased pets, where they were sitting on top of the decked out piano in heart-shaped frames. After the emotional performance, Miley took to Instagram to write, "Dear Floyd, thank you for sharing this magical moment with mommy. I misssssssss yiewwwwww #mileyonsnl #thetwinklesong #wemissutwinkle #wemissufloyd #wemissupablow."
So don’t say I didn’t warn you guys about those tears of laughter and sadness and all the above, but water works aside, Miley has managed to set the bar real high for the remainder of the SNL season. But i want to know all your thoughts on her performances and skits, and let me know which one was your favorite right down here in the comments section. After that, you can click over here to check out 13 celebs that should have own reality show. Thanks so much for hanging out with me here on Clevver News, I’m your girl Erin Robinson and I’ll see ya next time.
For More Clevver Visit:
Website:
Like us on Facebook:
Follow us on Twitter:
Keep up with us on Instagram:
Add us to your circles on Google+:
Tweet Me: 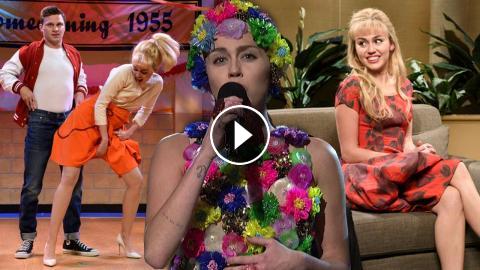 Celebs That Should Have Own Reality Show ►► More Celebrity News ►► Me oh MILEY, what an EPIC start to the 41st season of Saturday Night Live, and you ...