admin
Join us a Moroccan Food Review in Granada, Spain as we wander through the Moroccan Souk (Calle Calderería Nueva) stopping at restaurant Al-Faguara to eat hummus, falafel, harira soup, chicken tagine, couscous, spinach rolls, baklava, mint tea and coffee. It was a feast of feasts with all of the Moroccan dishes only checking in at 12 Euros per person.
Aside from just Moroccan cuisine a visit to the Alcaicería Grand Bazaar is a must for anyone shopping in Granada, Spain as you'll find a great collection of souvenirs, clothes and teaware.
Restaurant in Granada, Spain information:
Tetería Alfaguara
Address: Calle Calderería Nueva, 7, 18010 Granada, Spain
Hours: Everyday (1PM–12AM)
Phone: +34 958 22 91 70
GEAR WE USE
Panasonic GH5:
Canon G7X ii:
Rode Video Micro:
Joby Gorilla Pod:
SanDisk 16GB Extreme Pro:
SOCIAL MEDIA & TRAVEL BLOGS
AUDREY:
blog:
instagram:
facebook:
twitter:
SAMUEL:
blog:
facebook:
twitter:
instagram:
Moroccan Food Review in Granada, Spain Travel Food Video Transcript:
It is day 3 in Granada so we have basically covered most of the main attractions. Yeah. But we have another beautiful sunny day. We do. Even if it is cold so we're going for a walk along the Darro river before we have lunch. Then we're going to do Moroccan food but most of the restaurants don't even open until 1 pm.
For today's meal here in Granada we are at a Moroccan restaurant. This place is called Al-Faguara and we were here yesterday and it was so good that we immediately planned to come back for lunch the following day. Why are we having Moroccan food?
Because we are like a ferry ride away from Morocco.
This is a big part of the cuisine culture here in Granada.If you come here there is just restaurants galore yeah in terms of what you can try from Morocco basically. We've been doing a lot of shopping on what is known as Moroccan street and they have a lot of tea shops and restaurants. So yeah we figured let's make a dedicated Moroccan food video and introduce you guys to some tasty dishes.
we should mention we are doing a three course meal. Yes, we are. So appetizers first. Yeah and before I even begin I want to make a point that we all carefully selected different food items yes so we can show you something different.
So Sam I've got pita bread here. And I have delicious looking hummus that has it looks like it is very spicy. It looks like it has some paprika maybe.
ow we are moving on to George. Who got the falafel. Three falafels.
So let us see how we do with that. Okay. Isn't this the same thing you had yesterday as well?
It was. it was the same thing.
For my starter I got the harira which is a Moroccan soup. And it is steaming so careful how close you get the lens.
So as you can see it has got some chickpeas, noodles. It has a little bit of beef. Some vegetables. And yeah it is just really nice on a cold day. It is really hearty.
Moving on to the mains. I ordered the Chicken Tagine which is cooked in a claypot.
Clear or ceramic.
If you take a closer look we have two pieces of chicken, a bed of green peas. We've got carrots. Zucchini. So lots of veggies in here.
It was still bubbling when they brought it to the table. So this is probably going to be hot.
This is chicken with couscous on the bottom. It has got raisins, caramelized onions and it is sweet.
Now moving on to George.
We have a spinach roll. Yes. And a little mountain of rice. Mountain of I'm not sure what it is. It looks like rice and veggies.
Now moving on to dessert. They have 3 options. You can get tea, coffee or ice cream. Today we've gotten teas and coffees.
Got myself a little cup of tea. It comes in this beautiful teapot.
What we ended up doing is supplementing our dessert which is our tea and our coffees with baklava.
We're going to enjoy our dessert and then we'll be back for price point.
That was a fantastic meal. In terms of the price point it came to 48 Euros total for the 4 of us. 12 per person
This is part of our Travel in Spain video series showcasing Spanish food, Spanish culture and Spanish cuisine.
Music by Joakim Karud: 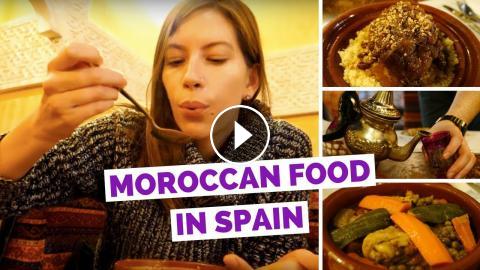 Join us a Moroccan Food Review in Granada, Spain as we wander through the Moroccan Souk (Calle Calderería Nueva) stopping at restaurant Al-Faguara to ...