admin
Come join us for a Balkan Food Review in Ljubljana, Slovenia at restaurant Čevabdžinica Sarajevo '84 as we share our impressions trying Bosnian food for the first time. One of the most exciting things for us as we travel through Slovenia and down to Croatia, Bosnia and Montenegro is that we'll have ample opportunity to try many different kinds of Balkan food for the first time. Our overall impressions of Bosnian food at this restaurant is that we loved it and want to try even more. With Mostar as a confirmed destination we'll be visiting in the near future we're keen to sample as many things as possible.
Balkan Food List: (Bosnian Cuisine that we tried)
1) Bosnian red wine: rdeče vino blatina
2) Bosnian beans and sausages: prebranec s sudžukico
3) Bosnian pita and meat: čevapčiči
4) Bosnian stuffed red pepper: pečena paprika
5) Bosnian cheese bread rolls: bosanske pide or burek
6) Bosnian dessert: tufahija
Restaurant in Ljubljana, Slovenia location and hours:
Sarajevo '84
Bosnian Restaurant
Address: Nazorjeva ulica 12, 1000 Ljubljana, Slovenia
Hours: 11AM–12AM (daily closing early on Sundays)
Phone: +386 1 425 71 06
GEAR WE USE
Panasonic GH5:
Canon G7X ii:
Rode Video Micro:
Joby Gorilla Pod:
SanDisk 16GB Extreme Pro:
SOCIAL MEDIA & TRAVEL BLOGS
AUDREY:
blog:
instagram:
facebook:
twitter:
SAMUEL:
blog:
facebook:
twitter:
instagram:
Balkan Food Review - Our first impressions trying Bosnian Food in Ljubljana, Slovenia Video Transcript:
It is time for lunch. We are still here in Ljubljana and today we've decided to have Balkan cuisine. We found a restaurant called Sarajevo 84. Apparently it specializes in Bosnian food and have we already mentioned that we're kicking off our trip through the Balkans in about a week's time. Hmmm. Haha.
Now would be a good time to mention it. It is a good way to announce it with Balkan food. I can't say I've ever had Balkan food before. I don't really know what to expect but I've been like glancing over at other people's plates and you know nearby tables and everything looks really good. It looks like it is meat heavy. Lots of bread. We've ordered I think like 5 different dishes and we'll see what arrives because we didn't even know what the names meant.
The wine is here and Sam is having the Rdeče Vino Blatina I believe.
This is the one dish I really wanted to try. It is basically beans and sausages served in a ceramic bowl.Let me find it on the menu first. I believe it is prebranec s sudžukico. Either way it is beans and sausage.
This next one may be called čevapčiči or something similar. Yeah. And check it out. It is basically grilled meat rolls in a flatbread. Alright, time to take a bite of this and I like to eat with my hands.
Moving on to dish number three. We've got ourselves some roasted red peppers and I believe this is called pečena paprika maybe. Let's hope I got that right.
And yeah, it looks like it has got some chunks of garlic there. That looks really good. That is really nicely presented I have to say.
This right here would be the Bosanske Pide which means which is the Bosnian pide. Yes. The Bosnian bread. And we ordered the one with cheese. Oh yeah. And this is very different from the Turkish one we've tried because the Turkish one is shaped more actually it is shaped more like the serving plate. Yeah. Whereas this one is very much round. Yeah. .And these are also wow they're thick.
Dessert is here. We have ordered the tufahija which is an apple and nut dessert. Though right now it is covered in whipped cream.
Time for price point. It came to 23 Euros just slightly over 23 Euros. And that included five food items and two drinks so 7 things in total. I think that was like outstanding value. I would agree. It was really good food & good quality. We're really full so that is a sign of a good meal. We'd recommend coming here for sure.
This is part of our Travel in Slovenia video series showcasing Slovenian food, Slovenian culture and Slovenian cuisine.
This is part of our Travel in the Balkans video series showcasing Balkan food, Balkan culture and Balkan cuisine.
This is part of our Travel in Bosnia video series showcasing Bosnian food, Bosnian culture and Bosnian cuisine.
'Electro Cabello' music in this video courtesy of 'Kevin Macleod' from (incompetech.com) under a creative commons license. 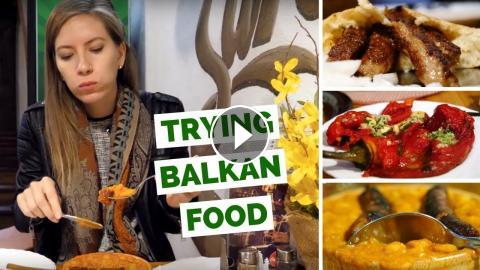 Come join us for a Balkan Food Review in Ljubljana, Slovenia at restaurant Čevabdžinica Sarajevo '84 as we share our impressions trying Bosnian food f...