Myanmar street food dosa (would you like salty or sweet?)

admin
One of the many street food snacks to eat in Myanmar is a dosa, also known in Burmese as a kee mar. Read the full article here:

When you’re walking around Yangon, you’ll have many different choices for an afternoon street food snack. Many things are deep fried, there’s a variety of different types of salads, and then there are Myanmar style dosas. A dosa is originally a south Indian creation, like a big crepe that’s often filled with masala spiced potatoes and wrapped up into a cone or burrito shape, and then eaten with a number of sauces or chutneys. You can get an Indian style dosa in Yangon as well, and I ate them a number of times, but there are also street side dosas that are a bit different.

Ying and I were just walking past when we noticed this dosa vendor, and she had just set up her shop and was starting to sell her snacks - and all of a sudden a few people put in their orders as soon as she started cooking. It looked good and fresh, and so we couldn’t help ordering. I noticed that she was cooking two different types of street food dosas, one was savory and the other was sweet, so since we didn't want to decide which one to go for we got both.

The batter of a Myanmar dosa is a mixture of rice flour, and it’s first spooned onto the hot griddle and spread out into a thin crepe. Then some oil and seasoning was sprinkled on, followed by a mixture of vegetables and some beans and boiled peas. Then on went some oil and a bit more seasoning, and then it was rolled up. The sweet version of the dosa was prepared with the same pancake crepe, but instead of the vegetables, instead it was a layer of palm sugar, then some coconut, and beans as well. It was also wrapped up, and once she was done cooking, she wrapped them in a colorful pieces of newspaper, and handed them to us, instructing us to hold them by the top instead of the bottom as it was so hot.

Both of them were very good, but since I’m more of a savory salty kind of guy, I liked that one better. The pancake was a little crispy on the outside, and it was warm and filled with vegetables on the inside. The sweet dosa was also very good, nice and flavorful from the palm sugar, and fragrant from the shreds of fresh coconut. Both were good and made a nice Myanmar street food snack in Yangon.

So which dosa do you think you would like better, salty or sweet?

Music in this video courtesy of Audio Network
Mark is the eater at: &
Thai food guide:
Resources:
Get my newsletter:
Instagram:
Facebook:
Finally, don’t forget to subscribe for more food videos every Sunday and Wednesday:

Myanmar street food dosa (would you like salty or sweet?) 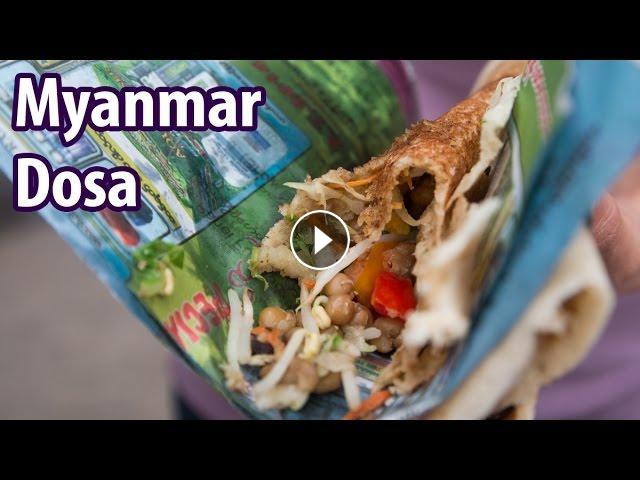 One of the many street food snacks to eat in Myanmar is a dosa, also known in Burmese as a kee mar. Read the full article here: When you’re walking ar...