admin
Come join us for an Indian Street Food Tour in Pune, India where we visit JM Road (Jangali Maharaj) at night to sample delicious dishes such as Puri, Dosa and Pulao to name just a few at various street food stalls known locally as Khau Galli.
David's Been Here:
Dharmesh (The Round Belly):
If you're thinking of trying street food in Pune one of your best bets at night is to head down to JM Road - Jangali Maharaj. For our Indian street food tour that evening with Dharmesh and David we tried the following dishes:
1) Masal Puri
The most colorful dish of the evening that we tried was Masal Puri. These hollowed out puffs are covered in a masala mix of puffed rice, sev, chaat masala, coriander and tomatoes. It was the crunchiest snack we tried all night.
2) Pani Puri
Our next street food snack is one of my favorites in all of India - Pani Puri! Hollowed out puri is stuffed with watery based chutneys that are minty, refreshing and spicy. It is an explosion of flavors as you pop one in your mouth.
3) Sponge Dosa
I was surprised when Dharmesh got to try our next Indian street food dish for the first time. Sponge dosa is similar to a spongy crepe or pancake and was served with three different types of chutney including tomato garlic, mint coconut and a potato mash. It was our favorite Indian street food snack of the night hands down.
4) Tawa Pulao
Our next dish, Tawa Pulao, was an incredible mix of different ingredients featuring rice cooked with tomatoes, onions, green pees and cheese on a tawa grill. It was kind of a fusion between Chinese style rice but with Indian spices.
5) Buttermilk
Our last thing we tried was a buttermilk known locally as Masala Chaas. It has a strong unproccessed refreshing and sour taste. I have to say out of all the things I tried this was the one thing I didn't like but it did help cool us all down.
GEAR WE USE
Panasonic GH5:
Canon G7X ii:
Rode Video Micro:
Joby Gorilla Pod:
SanDisk 16GB Extreme Pro:
SOCIAL MEDIA & TRAVEL BLOGS
AUDREY:
blog:
instagram:
facebook:
twitter:
SAMUEL:
blog:
facebook:
twitter:
instagram:
Indian Street Food Tour in Pune, India at Night | Trying Puri, Dosa & Pulao Travel Video Transcript:
Greetings from Pune, India! I'm with David's Been Here & we're going to devour street food here in Pune, India. It is all about the Indian Street Food tonight.
First off we are at a place called Khau Galli. Khau Galli literally translates into 'eat street'. Khao means eat and Gali means a small street.
And you have every kind of street food out here ranging from Pani Puri to Bhel Puri to Dabeli. Today we are having the Masal Puri out here.
I love Pani Puri. Tried it for the first time a couple of nights ago in Mumbai. It is basically this carved out little ball. They have two different kinds of chutneys in there. You put it in your mouth it just explodes.
Next up is Sponge Dosa. It is basically like an Indian crepe. We have different dipping sauces and I'm just going to get after it.
It feels really spongy in the hands. I'm just going to rip off a little piece. I'm going to try this sauce. It is a mint coconut chutney.
We are having the Tawa Pulao in one of the Khau Gallis out here on JM road (Jangali Maharaj). Basically Tawa is a flat grill. It is a large grill where they put in onions, tomatoes, rice. It is oily and greasy item to eat. And it is topped off with cheese.
we are going to have a cooler. It is called buttermilk. The Indian buttermilk which is basically a thinned yoghurt. This is also a masala based drink where they add in a little bit of spices and top it off with cilantro.
The Indian name of it is chaas). Masala Chaas.
that was an absolutely fantastic Indian Street Food Tour here in Pune. What did you guys think?
It was amazing. It was amazing? What was your favorite thing? Sponge dosa! Thanks for watching and see you next time for more food and travel videos from India.
This is part of our Travel in India video series showcasing Indian food, Indian culture and Indian cuisine.
Music by Artlist: 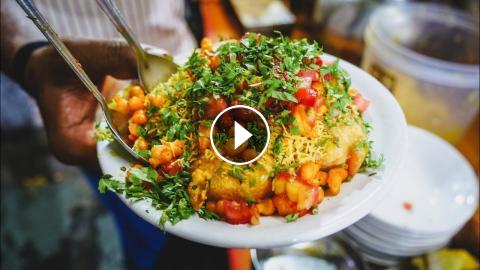 Come join us for an Indian Street Food Tour in Pune, India where we visit JM Road (Jangali Maharaj) at night to sample delicious dishes such as Puri, ...