admin
Come join us for the best Indian breakfast food tour in Pune, India as David and I hit the ground running during our first full day together. To sample as many delicious Indian breakfast dishes as possible we're joined by our like guide Dharmesh (aka The Round Belly) who did a fantastic job of taking us to restaurant in Pune that were popular with locals.
David's Been Here:
Dharmesh (The Round Belly):
When it comes to breakfast in Pune diversity of flavors and ingredients is the name of the game. During one bite you might be chomping on something saturated with butter and on your next bite nearly choking on spices with plenty of sweet bites in between. As you'll find out in this breakfast food tour in Pune eating at one establishment doesn't even scratch the surface of possibilities. All in all we tried the following Indian breakfast items in Pune, India in the following restaurants below:
INDIAN BREAKFAST TOUR STOP #1
Vohuman Cafe
Address: Millenium Star, Near Ruby Hall, Dhole Patil Rd, Sangamvadi, Pune, Maharashtra 411001, India
Hours: Monday to Sunday 6a.m.–8p.m.
Phone: +91 93733 23263
1) Butter Toast
I doubt you've ever had as much butter on your toast as what is served up at Vohman Cafe. Drowning in butter and toasted to perfection you'll pop more than one slice guaranteed.

2) Irani Chai
A unique chai (tea) made by adding special ingredients mawa and/or khoya to black tea. Irani Chai is typically sweet and creamy with spices like cardamon and cinnamon added.
3) Butter Bun
Imagine a bun featuring dried fruit sliced in half with the thickest layer of butter in between. Best had by dipping again and again into Irani Chai.
4) Butter Cheese Sandwich Toast
Grab two pieces of thickly buttered toast and then stick a layer of cheese in between that is just as thick. That is what you get with this "I don't want to know how many calories are in this" dish.
5) Egg Bhurji
Spicy Indian scrambled eggs featuring green peppers, red peppers, onions, tomatoes and spices. It was packed with spice and flavor.
INDIAN BREAKFAST TOUR STOP #2
Cafe Good Luck
Address: Fergusson College Road, Deccan Gymkhana, Near Goodluck Chowk, Pune, Maharashtra 411004, India
Hours: Monday to Friday 7:30a.m.–11:30p.m.
Phone: +91 20 2567 6893
6) Keema Pao
The signature dish we tried at this cafe was Keema Pao - a dish consisting of minced mutton curry featuring cloves, onions, tomatoes, cardamon and ginger. You scoop it up by the spoonful or eat it like a local with a piece of bread.
7) Chocolate Drink
INDIAN BREAKFAST TOUR STOP #3
Bedekar Tea Stall
Address: 418, Munjabacha Bole Road, Narayan Peth, Pune, Maharashtra 411030, India
Hours: Monday Closed
Tuesday to Saturday 7a.m.–7p.m.
Sunday 7a.m.–3p.m.
Phone: +91 20 2445 1270
8) Misal Pav
Last but not least we tried the popular Maharashtrian dish Misal Pav. Missal referring to a spicy moth bean based curry featuring chiwda, potato, sev, lemon and corriander. It is the spiciest dish we had on this food tour and also quite crunchy
GEAR WE USE
Panasonic GH5:
Canon G7X ii:
Rode Video Micro:
Joby Gorilla Pod:
SanDisk 16GB Extreme Pro:
SOCIAL MEDIA & TRAVEL BLOGS
AUDREY:
blog:
instagram:
facebook:
twitter:
SAMUEL:
blog:
facebook:
twitter:
instagram:
BEST INDIAN BREAKFAST Food Tour in Pune, India Travel Food Video Transcript:
ppp
This is part of our Travel in India video series showcasing Indian food, Indian culture and Indian cuisine.
Music by Artlist: 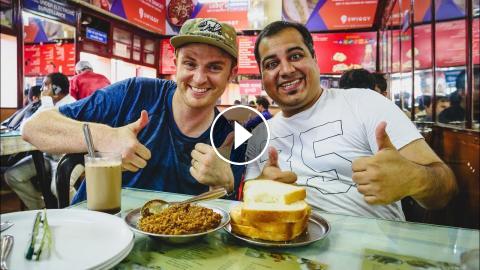 Come join us for the best Indian breakfast food tour in Pune, India as David and I hit the ground running during our first full day together. To sampl...