admin
Come join us for a Pune Street Food tour trying Vada Pav (aka Indian Burger) for the first time. Indian Street Food in Pune is legendary and with unlimited choices. Fortunately, our guide Dharmesh took us to a few of his favorite local spots where we had the opportunity to try sugarcane juice, Chai masala tea, Vada Pav and Mastani for dessert.
David's Been Here:
Dharmesh (The Round Belly):
Along the way we also did some sightseeing in Pune, Maharashtra including visiting Shaniwar Wada Fortress, Shreemant Dagdusheth Halwai Ganapati Temple and having our palms read on the street. In terms of attractions Pune definitely has some to offer but we felt like it is more of a foodie city and we'd recommend a Pune food tour over anything else.
GEAR WE USE
Panasonic GH5:
Canon G7X ii:
Rode Video Micro:
Joby Gorilla Pod:
SanDisk 16GB Extreme Pro:
SOCIAL MEDIA & TRAVEL BLOGS
AUDREY:
blog:
instagram:
facebook:
twitter:
SAMUEL:
blog:
facebook:
twitter:
instagram:
Pune Street Food Tour Trying Vada Pav | Indian Street Food in Pune, India Travel Video Transcript:
Sam and David coming to you from Pune, India. And in this video we're going to be checking out attractions in Pune and having lunch in Pune. A combination of travel and street food.
We're going to have sugarcane juice out here. We have been having breakfast which has been spicy and Pune is known for its spicy food. Now we're going to go back to cool ourselves down and have some sugarcane juice.
First attraction. What are we visiting in Pune? This is basically a fort. It is called Shaniwar Wada. Historical palace. Baji Rao Palace it is established in 17th century. Baji Rao first, second, third.
There is the original palace. The founding person.
This is used to be a large reservoir since at the peak of the Pershwa period about a 1000 people lived in the Shaniwar Wada. This large reservoir would have been a necessity.
This complex is even bigger than I expected. And I think the main thing for us to do is to go climb along the top part of the walls which look pretty awesome and I think we'll have some really good views from there.
On our way to the next attraction we found a Palm Reader on the street. Basically you get your palm read and you just pay whatever you think is a fair price.
Most of the places where you see a Banyan tree they feel it sacred. They feel it like there is some supernatural power and they basically light up candles or the incense sticks.
Masala chai which you are having. First he put in some milk. And he added some tea leaves in it. And when it comes to a boil he put his homemade ingredients which is the masala.
Which is basically ground cinnamon, ground cloves and then he added some cardamon to his morten pestle and he put that spice in with the leaves on.
We are the Shreemant Dagdusheth Halwai Ganapati temple. It is one of the oldest temples out here. It is about 125 years old and this is the most famous temple and it is crazy during Diwali festival which is a 10 day long festival that happens here.
Vada Pav is an Indianized Burger. It has a potato patty. The flat potato patty with all of the ground spices which is mixed with potatoes, green chillies and a little bit of more Indian spices.
It is ground and deep-fried and it has a mint chutney coating on the bun itself. Around the Pav. And so along with some raw onions and some fritters and green chillies.

And green chillies? Sounds delicious. Look at that man. Green chillies itself sometimes you see fried with salt. It has salty and spicy taste to it. And it has an aftertaste which is really good.
Mastani is basically a milkshake. Yeah. And they add a scoop of ice. It is amazing for the hot winter or hot summers out here. It really cools you down.
And we need that. It is so hot. They added the milkshake. It is a very thick creamy milkshake. The scoop of ice cream, some nuts, almonds, cashews and pistachios.
This is part of our Travel in India video series showcasing Indian food, Indian culture and Indian cuisine.
Music by Artlist: 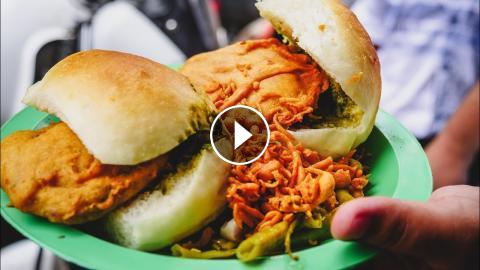 Come join us for a Pune Street Food tour trying Vada Pav (aka Indian Burger) for the first time. Indian Street Food in Pune is legendary and with unli...