Added 1 week ago by admin
12 Views
More Celebrity News ►►
Looks like Valentine’s Day came a few days early for Swifties because Taylor Swift was just spotted sharing a rare moment of PDA with her boyfriend Joe Alwyn in public!
What’s up guys? It’s Sussan Mourad here with Clevver News and love is clearly in the air because Taylor Swift and Joe Alwyn just attended the NME Awards in the UK and they weren’t shy about sharing a kiss or two at the award show.
Taylor’s appearance at the New Music Express Award Show was actually a surprise but she came and accepted her award for Best Solo Act in person!
Taylor went on to call the show quote “the craziest awards show I have ever been to.”
I mean after all, the trophies are middle fingers.
Taylor last won an NME back in 2016 and accepted via video at the time, so it was a delight for us all to see her out and about at an award show.
I mean she did skip the Grammys so we will take what we can get around here!
And before we get into her and Joe Alwyn heating things up with multiple kisses throughout the show, I need to take a moment for Taylor’s look because she rocked this edgy suit, or half-suit, with half of her top being a pinstriped blazer and the other half a white shirt paired with black and white pinstriped shorts.
All while sporting her signature red lip.
The whole look was a win even before she won her award.
Ok now let’s get to what you all are here for, Taylor and Joe.
It seems like 2020 is a whole new era for the once super-private couple. They are totally fine being a little more public this year.
They started the year off by sitting next to each other at the Golden Globes and showing very mild PDA there.
But then last night, at the NME Awards in London, they shared some more PDA taking things to another level.
They sat next to each other, and an audience member got a video of them kissing during the show.
And she was pretty much all of us with her caption. She wrote quote, “Taylor and Joe are so precious I’m gonna faint #NMEAwards2020”
They also hugged when Taylor was announced the winner of Best Solo Act and it was adorable.
And the audience member came through again with the video and caption writing quote, “Taylor winner of Best Solo Act in the World announced, the hug I’m dying”
And overall, it seems like Taylor was generally pretty affectionate with Joe throughout the ceremony.
I mean at this point, they've been together for three years and we all know that they are dating so we appreciate these little moments.
Even though we totally respect their privacy.
And if you’ve seen her new Netflix documentary Miss Americana you know how important their privacy is to Taylor and how special their relationship is.
In the doc, Tay discussed falling in love with Joe after her public image took a hit in the summer of 2016.
So just getting peeks into their life together is enough for us!
And fans agree, they are totally freaking out over this sweet PDA moment.
One person wrote quote, “My heart!”
Another said quote, “Thank you for this”
And another wrote quote, “The moment I've been waiting for omg”
And we couldn’t agree more!
This is the perfect way to ring in Valentine’s Day…..
I need to know all your thoughts on this VIDEO EVIDENCE of Joe and Taylor’s affection.
Were you excited to see that Taylor attended the NME Awards WITH JOE? And what do you think about the PDA?
Let me know down in the comments below.
Then be sure to hit that subscribe button, click that notification bell and then move your cursor right on over here to check out another new video.
Thanks so much for hanging out with me here on Clevver News, I’m Sussan Mourad and I’ll catch you next time!
For More Clevver Visit:
Find us on Facebook:
Keep up with us on Instagram:
Follow us on Twitter:
Tweet Me: 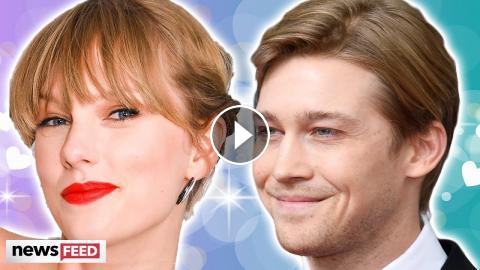