admin
More Celebrity News ►►
Gravity will turn on you if you’re not careful and that’s exactly what happened to Bella Hadid when she took a runway tumble during New York Fashion Week.
Heels can be a blessing or a curse and although Bella tripped on the runway, she handled it like a pro.
Despite what the masses may believe, walking in a runway show is not easy and even the most seasoned and famous supermodels have their moments. On Wednesday, Bella was walking in the Michael Kors’ Spring 2017 collection runway show for New York Fashion Week when she showed that she was human. As she made her way around a corner, the platform heels she was wearing turned on her and brought her to the ground, but as the professional she is, she recovered with grace and kept going like a boss. The heels that models wear in runway shows are no joke so it’s really a miracle that they’re able to stand at all, let alone walk in those suckers. But Bella was such a good sport about it and tweeted – “Guys I’m a professional break dancer now I forgot to tell you.
Bella’s good friend, Hailey Baldwin tweeted her support saying “Ur a legend and a full on pro @bellahadid” to which Bella responded, “I love you.” And despite the unfortunate runway spill, Bella was still excited about the opportunity and showed her gratitude to the designer on instagram by posting a video of her walk saying QUOTE – “Thank you so much for having me in the show Michael Kors John David Pfeiffer.” She even poked fun at herself by hinting at her tumble in the caption saying “seconds before.”
Bella is still a rockstar and you know what, sometimes we take falls in life, but like Bella you just have to get up and keep slaying. I want to hear your thoughts so sound off in the comment section below and then click right over here for a recap of the week’s hot topics on Clevver’s weekly chat show. And as always, don’t forget to subscribe. Thanks for watching Clevver News, I’m Sinead de Vries and I’ll see you next time.
For More Clevver Visit:
Website:
Like us on Facebook:
Follow us on Twitter:
Keep up with us on Instagram:
Add us to your circles on Google+:
Tweet Me: 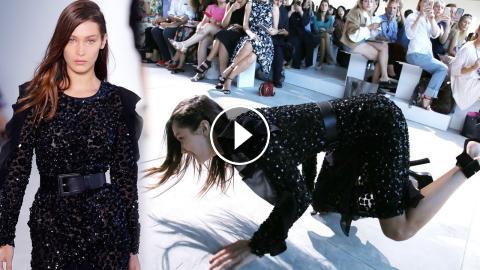 More Celebrity News ►► Gravity will turn on you if you’re not careful and that’s exactly what happened to Bella Hadid when she took a runway tumble du...