admin
More Celebrity News ►►
So in case you were unaware, let it be known that after the last 24 hours, Calvin is doing JUST FINE post-split… seriously guys, he’s FINE.
After the major Swiftstorm that just went down across Calvin Harris’ social media accounts yesterday, we can officially confirm that behind every man scorned is a Taylor Swift who made him that way… Screenshots of Calvin Harris replying to a handful of Swifties on Instagram made its way through cyber space yesterday only to be ‘deleted’ minutes later, however, we all know there’s really never such thing as ‘gone forever’ on the interwebs, thanks to a little thing called a screengrab.
But I DO have to mention that after the comments were posted and deleted, a rep from Calvin spoke out saying the comments did not come from him although they were sent directly from his account, so take this as you might. One of the first comments started after a Swiftie told him people wouldn’t have hated him had he told his side in the very beginning (or end, for that matter) to which Calvin shockingly responded QUOTE, “she controlled the media and this situation, I had no idea what was going on. So that kind of makes it a lot worse from my perspective.”
Another user accused Calvin of being jealous because Taylor’s moved on and found a new boyfriend, also claiming that that’s why Calvin wore a pair of Yeezy’s, to which he responded, “not jealous sir, FREE”
In response to another fan Calvin replied saying that Swifties need to grow up. Given the not-so-subtle shade throwing, one fan asked why he hates Taylor, when he responded, “I don’t at all.”
And the cherry on top of a he-said-she-said social media dispute is this statement from yet another fan: "For all we know Taylor broke up with him to be with another man and that is quite upsetting. I would be hurt by that too. He's not being mean. He deserves to feel free while he's single and not feel jealous" to which Calvin allegedly responded with, “You’re the only smart one at this point.”
But, like I previously stated, an update has just been released this morning saying that the deleted comments were NOT Calvin’s doing. Thanks to what could possibly just be the magic of Photoshop or the magic of the ‘delete’ button, we may never fully know the truth. However, Calvin DID take to Snapchat to share a clip of Jessie J’s hit “Domino”, specifically the lyrics that read, “I’m feelin’ sexy and free” alluding straight back to that, “Not jealous sir, FREE” alleged comment he made via Instagram.
Alright, so all this detective work is making my head spin, and whether false or not, the past is in the past, so let’s just let these three live their lives. As for current updates on the exes, Taylor was last seen with Tom dining in Nashville just last night. They were spotted holding hands throughout dinner while she rested their conjoined hands on his shoulder… talk about not keeping her hands to herself! And as for Calvin, the DJ is busy celebrating a newly released single with Dizzee Rascal, called “Hype”… annnnd flaunting his toned abs in a speedo with some pals… and talk about PACKIN… a 6-pack, you guys, get your minds outta there.
After all this, I’m gonna need a second, or a drink, or whatever, but I want to know what you guys think about all these Instagram comments, do you think they were fabricated or is Calvin now the one controlling the media? Get to talking right down here in the comments section below, and after that, don’t forget to click right over here to check out our brand new show called Diss Track where yet another feud is brewing (or continuing) between Katy Perry and Taylor Swift. Thanks so much for checking in with me here on Clevver News, I’m your host Miriam Isa and I’ll see you next week!
For More Clevver Visit:
Website:
Like us on Facebook:
Follow us on Twitter:
Keep up with us on Instagram:
Add us to your circles on Google+:
Tweet Me: 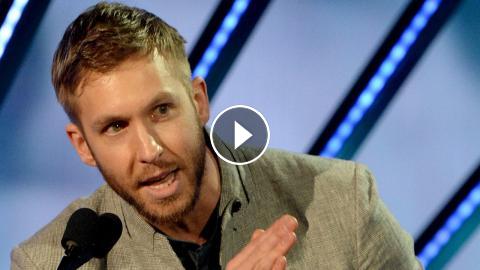 More Celebrity News ►► So in case you were unaware, let it be known that after the last 24 hours, Calvin is doing JUST FINE post-split… seriously guys...