admin
More Celebrity News ►►
Ever wonder what Chloe Grace Moretz did with that perfume delivery from her number 1 celebrity enemy Kim Kardashian? We now have the scoop.
Only Kim Kardashian would send a Valentine’s Day gift to her haters, too.
Kim Kardashian proved just how savage she really is when she mailed out her KIMOJI HEARTS perfume collection to not only her celebrity friends, but also her celebrity enemies, just in time for Valentine’s Day 2018.
Kim showed off all the haters, including Taylor Swift, Blac Chyna, and Wendy Williams, she was sending her fragrance to and said QUOTE “I’m going to send them to my lovers, to my haters; to everyone that I think of because it’s Valentine’s Day after all.”
Chloë Grace Moretz was among those haters on the receiving end of KKW’s savage present, but she actually never even saw the gift in person.
Chloe was on Watch What Happens Live earlier this week and a viewer asked her what she did with the now-infamous gift. While you may have been thrilled to get a delivery from Kim Kardashian, even if it was a little bit shady, the 21-year-old had a bit of a different reaction.
6:06-6:22
The drama between the Keeping Up with the Kardashians star and The Miseducation of Cameron Post actress began when the later criticized a naked picture the former posted online in March 2016.
Chloe tweeted in response QUOTE “I truly hope you realize how important setting goals are for young women, teaching them we have so much more to offer than just our bodies.”
Kim did not like the response, which she took to be slut-shaming, and fired back saying QUOTE “Let’s all welcome @ChloeGMoretz to twitter, since no one knows who she is. your nylon cover is cute boo.”
It’s been over two years since the initial feud went down and Chloe is officially sick of talking about it.
She tells Refinery29 QUOTE, “I’m over it. There are so many things that we talked about last night on Watch What Happens Live and the fact that literally the one headline across every single major news site right now is me and Kim Kardashian. It’s a dead story, in my opinion. I’m tired of being asked about it, and I’m tired of that story being picked up, especially when I’m promoting a movie about conversion therapy, that is a very real, modern issue in America.
Can you imagine if Kim Kardashian sent you a gift and you didn’t even care enough to go see it in person? Can’t relate. What would you have done if you were in Chloe’s shoes? Tell us your thoughts in the comments below. I’m your host Zoe Lillian thanks for watching! Please Click to the right to watch another new Video and don't forget to subscribe to our channels.
For More Clevver Visit:
There are 2 types of people: those who follow us on Facebook and those who are missing out
Keep up with us on Instagram:
Follow us on Twitter:
Website:
Add us to your circles on Google+:
Tweet Me: 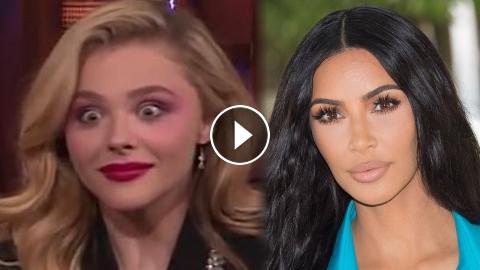 More Celebrity News ►► Ever wonder what Chloe Grace Moretz did with that perfume delivery from her number 1 celebrity enemy Kim Kardashian? We now hav...