admin
More Celebrity News ►►
Rumors that Dylan and Chloe are dating are running amok right now, thanks to the pair being spotted together at multiple locations in Hollywood last night.
First, Dylan and Chloe were seen at celebrity hot-spot “The Nice Guy”, and although they arrived separately, the pair left together in the same car. We’re gonna guess they had dinner together and that this wasn’t just a convenient Uber Pool situation.
The pair then continued their night by hitting up bar “Beauty and Essex”, only this time they arrived side by side. And thus, a dating rumor was born.
Many fans were thrilled to hear about Dylan and Chloe’s night out, because Dylan has previously confessed to having a crush on the ‘Kick Ass’ star. He said back in 2011 QUOTE, “I wanna give a special shout out to Chloe Moretz because she is the most badass little chick that I’ve ever seen. What she did in Kick-Ass is amazing and I have a crush on her.”
Of course, the moment Dylan realized that Chloe was underage at the time, he took back his statement and said that while she was a QUOTE, “very cute and talented girl”, she was obviously way too young for him.
It was shortly after that incident that Dylan started dating actress Britt Robertson, who he’s been in a relationship with for the past 6 years. In fact, all of these Chloe dating rumors have had a lot of Dylan’s fans confused, because since when did he and Britt even break up?!
One fan tweeted QUOTE, “wait wtf did dylan and britt break up”, while another shared QUOTE, “I'm not sure about this whole Dylan & Chloe thing or even if they are a thing, but I'm certain now, he & Britt just aren't together anymore.”
Dylan and Britt haven’t been seen out publicly for months, so it’s very possible that the two had a quiet breakup without making any kind of announcement to fans.
And if that’s the case, that means Dylan and Chloe are BOTH currently single, as Chloe broke up with longtime boyfriend Brooklyn Beckham earlier this year. And with Chloe being 21 and Dylan being 26 now, it’s probably safe to say last night was a date.
So now I wanna turn things over to you guys -- do you ship Chloe and Dylan as a couple? Sound off with all your thoughts and feelings in the comments below!
For More Clevver Visit:
There are 2 types of people: those who follow us on Facebook and those who are missing out
Keep up with us on Instagram:
Follow us on Twitter:
Website:
Add us to your circles on Google+:
Tweet Me: 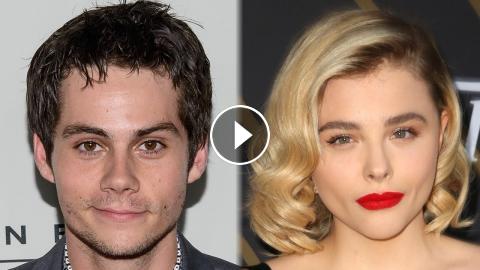 More Celebrity News ►► Rumors that Dylan and Chloe are dating are running amok right now, thanks to the pair being spotted together at multiple locati...