admin
Thank you to T-Mobile for sponsoring this episode.
T-Mobile never stops improving. With double LTE coverage, now you can stream your favorite videos and music in more places. Click to see how:
Diss Track: Miley vs Nicki ►►
More Celebrity News ►►
Khloe Kardashian is taking no prisoners when it comes to defending her family, SLAMMING Chloe Grace Moretz on Twitter and the results are 100-percent not safe for work.
Khloe Kardashian or Chloe Grace Moretz? That’s the real question here.
The flame has been reignited between Chloe Grace Moretz and the Kardashian family. We already know that Chloe with a “c” dissed Kim for posting that nude selfie earlier this year, but now Khloe with a “k” has taken the feud to an all new low.
By now, I think we’re all aware of the drama between Kim, Kanye, and Taylor Swift. But after last night’s episode of Keeping Up with The Kardashian’s and Kim posting those Snapchat videos of Kanye talking to Taylor on the phone, the internet has exploded and everyone is taking sides.
Backing up her sister, Khloe Kardashian decided to join in on the drama to live-tweet during last night’s episode praising Kim for releasing the truth saying, quote: “I’m dying. Kim is a savage! Don’t f*ck with her man hunni.”
However, it seems like not everyone in Hollywood was a fan of the drama. Actress Chloe Grace Moretz took to Twitter writing quote: “Everyone in this industry needs to get their heads out of a hole and look around to realize what’s ACTUALLY happening in the REAL world.” She then went on saying, “Stop wasting your voice on something so petulant and unimportant.”
And if you think for one second that Khloe Kardashian was going to let that one slide, oh no you are completely wrong. She posted two pics with the caption, “Is this the hole you’re referring to?” One photo was of Chloe Moretz wearing a red bikini top. And another showed a blonde girl, who looks very similar, getting a piggyback ride and her bottoms are pulled to the side, exposing her to the camera.
OMG. That is seriously brutal. But Chloe Grace responded by giving Khloe Kardashian a “fact check,” saying the first photo was taken during the filming of Neighbors 2, and the second is a girl who was wrongfully photographed.
Then, Chloe went on to post a few photos from the movie to prove it was NOT her, and that she’s actually wearing blue bottoms instead of red.
Wow. But things didn’t end there. Orange Is The New Black star Ruby Rose also joined in tweeting at Khloe Kardashian, “Yo Khloe I thought you were rad when I met you but this is awful and this is a 19-year old girl.” She even went on to say, “Nobody likes being bullied or made to feel worthless.. Yet so many people will go above and beyond to make others feel that way.”
Alright guys, I want to know how you feel about Chloe Grace Moretz speaking her mind and what you think about Khloe Kardashian’s response. Whose side are you on? Let me know right down here in the comments below and make sure to tweet me @MeghanLamontagne. Then, click right over here to check out an all new episode of Diss Track where Nicki battles it out with Miley Cyrus and be sure to hit that subscribe button. Thanks for hanging out with me today, I’m your host Meghan Lamontagne. See you guys next time!
For More Clevver Visit:
Website:
Like us on Facebook:
Follow us on Twitter:
Keep up with us on Instagram:
Add us to your circles on Google+:
Tweet Me: 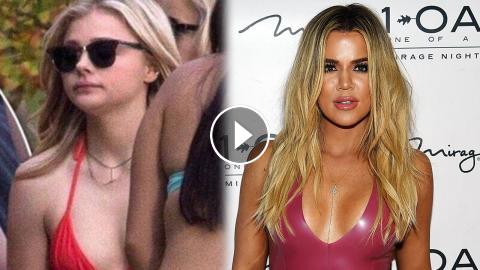 Thank you to T-Mobile for sponsoring this episode.T-Mobile never stops improving. With double LTE coverage, now you can stream your favorite videos an...