admin
More Celebrity News ►►
Very disturbing video of Donald Trump has gone viral. The previously unheard footage is from a 2005 Access Hollywood segment where then host Billy Bush and Mr. Trump are in a large bus and unaware that their mics are still on. It’s locker room talk like you’ve never heard before. Makes Nick Young look like a saint…
We now know he was speaking about Nancy O’Dell, host of Entertainment Tonight. It’s now being reported that Trump tried to fire O’dell when she rejected his advances. In addition to admitting that he tried to have sex with a married woman, in the footage we also hear Trump and Billy lose their sh*t over the beautiful actress Arianne Zucker from Days of our Lives who was waiting for them outside the bus. Trump had just married Melania at the time of this footage and yet he says this-
He then proceeds to say that when he sees a beautiful woman he just starts kissing them. He doesn’t wait for consent. And here’s his reason why…

Trump’s initial response after this went viral was a short statement saying QUOTE “This was locker room banter, a private conversation that took place many years ago. Bill Clinton has said far worse to me on the golf course - not even close. I apologize if anyone was offended.” Bill Clinton may also be a sleazeball… Remember his impeachment? He was held VERY accountable for it. As should Trump. And if he’s going to use time as his defense and say this happened a long time ago, well, it was way more recent than Bill’s scandals which were in the 90s. Here’s one thing we can be sure of- Donald doesn’t just see women as sexual objects who don’t deserve respect. He also sees them as numbers- in the voting booth. So following this implosion he released this video apology:
That’s not true. Many people who know him are saying this is exactly who Don is. This is the same man who’s said it’s very hard for a flat chested woman to be a 10. Can you imagine Barack disparaging women in this way?
What do you honestly think of Trump and his actions? What kind of a president do you think he’d make now? Comment below or on my socials then click here for Friday’s DHR to get a recap of Kanye’s original lyrics about Taylor Swift for Famous which have leaked. I’m Miriam Isa, debate with me on Twitter @Miriamisa and follow me on Instagram @Miriam_isa to see my scandalous Burning Man pics. Thanks for hanging out and see you guys later!
For More Clevver Visit:
Website:
Like us on Facebook:
Follow us on Twitter:
Keep up with us on Instagram:
Add us to your circles on Google+:
Tweet Me: 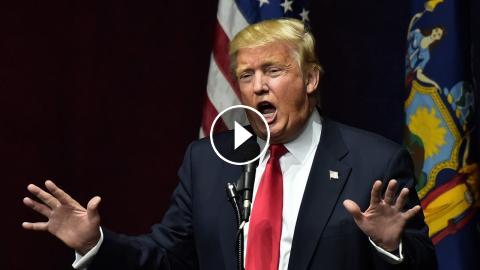