ava
James Corden connects with Halsey who has been really missing performing on tour, sans the on-stage mishaps which seem to follow her around. And James asks Halsey how she came to release her own makeup line. And Halsey shares how acting in community theater growing up gave way to her first love of the arts. 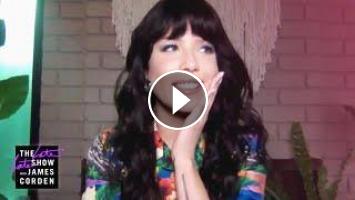 James Corden connects with Halsey who has been really missing performing on tour, sans the on-stage mishaps which seem to follow her around. And James...