admin
Best Comeback 2015 ►►
More Celebrity News ►►
Sorry Mom and Dad, I think James Corden wins the award for the best Christmas present this year!
One Direction, Justin Bieber, Carrie Underwood, they’re just some of the celebs who joined James on his carpool karaoke adventures, but who knew he also enlisted them to help him create the best Christmas Carpool Karaoke EVER?
The late night show host has done it again! A couple of days after James and his team dropped what we thought was the best edition of carpool karaoke with One Direction, he actually surprised us with a special carpool karaoke video that was 12 months in the making: a Christmas version with all of our favorite stars! 1D, The Biebs, Stevie Wonder, Carrie Underwood, Jason DeRulo, and a few other celebs joined in on the fun and this has to be one of the best things I’ve ever seen. Seriously you guys, just watch:
Hit that high note, Justin! Not only did we get an amazing rendition of Joy to the World, James also got Iggy Azalea to freestyle and drop a couple of lines for the video!
I think that’s one of my favorite parts, aside from watching Harry and Justin of course! Well, enough about me and my opinions! Let me know what your favorite part of this video was in the comment section below and when you’re done with that, click right over here to find out which celebrity had the BEST comeback of 2015 on Debatable! Also, don’t forget to subscribe! Thanks so much for hanging out with me on Clevver News, I’m your host Misty Kingma and I’ll catch ya later!
For More Clevver Visit:
Website:
Like us on Facebook:
Follow us on Twitter:
Keep up with us on Instagram:
Add us to your circles on Google+:
Tweet Me: 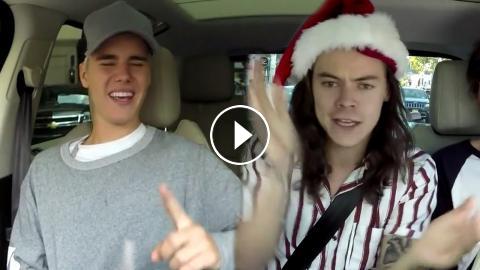