admin
9 Most WTF Justin Bieber Moments►►
More Celebrity News ►►
Justin Bieber takes a front seat in James Cordon’s famous karaoke caravan andddd let’s just say things went from sing-a-long to a game of 20 questions.
So The Late Late Show host James Cordon is at it again, this time picking up the one and only Justin Bieber. The two sang some of JB’s hits including Baby, Boyfriend and his newest hit Where Are U Now, and of course, JB added some of his super smooth dance moves to the mix. Check it out:
In between singing his famous hits, James expressed his admiration for Justin’s song “Baby” to which JB quickly replied, QUOTE, “It’s a smash record, it’s got the most dislikes on the internet!” …Well this isn’t awkward at all…
But after the two sang a few verses of another song together, James took this opportunity to put Justin in the hot seat, asking him personal questions like QUOTE, “Do you make love to your own music?” in which Justin was very quick to reply NO. He also asked Justin to pull out his most famous trick, solving a Rubik’s cube in under 2 minutes and, of course, JB came in clutch with the win.
Things slowed down near “The End of the Road” (literally) when James flipped on some old school Boyz II Men to which Justin showed off his souful R&B karaoke pipes once again. Take a look:
That’s the Justin we know and love! So what did you guys think about Justin and James’ karaoke carpool? He clearly hasn’t lost his touch or his sense of humor for that matter. But let me know what you thought about it in the comments section below and for more on The Biebs, you can click right over here to check out some of Justin’s most WTF moments. Thanks for checking in with me here on Clevver News, I’m your host Danielle Robay and I’ll see ya next time!
For More Clevver Visit:
Website:
Like us on Facebook:
Follow us on Twitter:
Keep up with us on Instagram:
Add us to your circles on Google+:
Tweet Me: 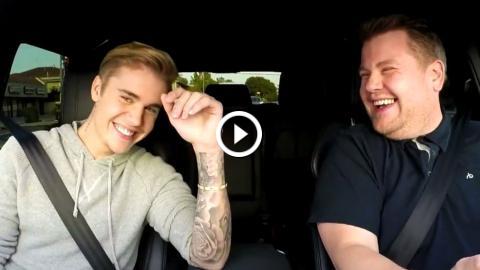