admin
High School Musical Throwback ►►
More Celebrity News ►►
James Corden and Sean Hayes are giving Justin Bieber a run for his money after recreating his hit “Sorry” on a giant piano, but does it earn the Biebs seal of approval?
Justin and James, James and Justin, these guys are like two peas in a pod, but after James’ rendition of ‘Sorry’, we can only hope for a killer collab on the horizon.
If you weren’t already aware, James Corden and his pal Justin Bieber go way back. JB participated in not one, but TWO of James’ carpool karaoke stints last year, he sat in for one of James’ monologues during the Late Late Show, and beyond the carpool karaoke, James even admitted that the two actually carpool to work together…
So when it came time to choose a song to perform on his brand new giant piano alongside Will & Grace star Sean Hayes, Justin’s latest single, “Sorry” was a total no-brainer. The two first tackled the song, “Heart and Soul” just like Tom Hanks’ iconic scene in the movie “Big”, giving us all major flashback feels. Check it out:
We weren’t quite sure how they would top that, but then James suggested something “a bit more hip, down and groovy with the kids,” so naturally Justin Bieber was the first thing to come to mind.
And you bet this version earned Justin’s stamp of approval. James took to Twitter to share the video of his performance, saying, QUOTE, “So here’s me and @theseanhayes doing some @justinbieber!” to which Justin immediately responded back, writing, “Nice! Lol”.
A man of few words, but hey, Justin seemed to enjoy it, so now I want to know what you guys thought about James and Sean’s version of “Sorry” on the piano, so share all your thoughts right down here in the comments section. After that, don’t forget to click right over here to check out a High School Musical cast: Where are they now? in honor of the 10th anniversary on a brand new Throwback. Thanks so much for hanging out with me here on Clevver News, I’m your host Danielle Robay and have a great weekend!
For More Clevver Visit:
Website:
Like us on Facebook:
Follow us on Twitter:
Keep up with us on Instagram:
Add us to your circles on Google+:
Tweet Me: 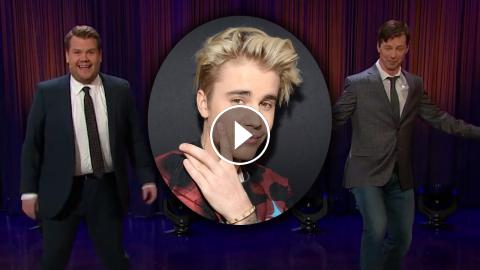