admin
Thank you to T Mobile for sponsoring this episode. With double the LTE coverage you can know it all from almost anywhere. Click to see how:
Full House Throwback ►►
More Celebrity News ►►
Not only has the Tanner house gotten much fuller this year, but our hearts are also about to become much more full of laughter and life because Netflix just gave the green light for a second season.
Our wishes have been answered: The whole gang is officially back for a second go-around, but our most dying wish? BRING BACK MICHELLE TANNER.
Less than a week after the highly anticipated premiere of Fuller House debuted on Netflix, the popular streaming service announced just this morning that a second season of the adorable family sitcom is officially in the works. An official release date has not yet been announced, however, I am not yet finished binge watching the first season, so let’s just take it one step at a time, shall we?!
But I’ll be the first to admit, since the new season was announced, that it’s hard not to look forward to what a new season will bring the Tanner clan… including even more speculation of a possible Mary-Kate and Ashley Olsen return to reprise the role of Michelle Tanner. The good news is that the series creator Jeff Franklin IS hopeful that one or both of the twins will return.
He said in a statement that QUOTE, “I am still hopeful that Mary-Kate or Ashley or both of them will come back and be a part of it, even if it's just for an hour. We miss that. Everybody does feel that hole in the family. But it's like, all family reunions, there's always somebody that doesn't show up. But hopefully next time around, we'll have them back."
And one more exciting announcement we can look forward to in the near future is the debut of Jodie Sweetin who plays Stephanie Tanner will be returning to not only Netflix, BUT also ABC as she is set to compete on next season of Dancing with the Stars. Jodie has danced on camera for quite some time, even busting a move in season one of Fuller House and as a child in Full House, so there’s no doubt she’ll be stealing the show once again, just like old times…
Jodie will be partnered with dancing pro Keo Motsepe this season, and although she turned down the gig in the past, she’s now ready to turn up the heat. She talked about her love for dancing, saying QUOTE, "I've always loved to dance, and Stephanie was a dancer on the show, and I danced growing up," she said. "I have some experience. I have some rhythm."
Ok now she’s just being modest, but I’ve gotta hear all your excitement about season 2 of Fuller House AND about Jodie’s big Dancing with the Stars debut, so get the conversation going right down here in the comments section. After that, don’t forget to click right over here to check out a Throwback episode of all things Full House. Thanks so much for hanging out with me here on Clevver News, I’m your host Jackie Iadonisi and I’ll see you next time.
For More Clevver Visit:
Website:
Like us on Facebook:
Follow us on Twitter:
Keep up with us on Instagram:
Add us to your circles on Google+:
Tweet Me: 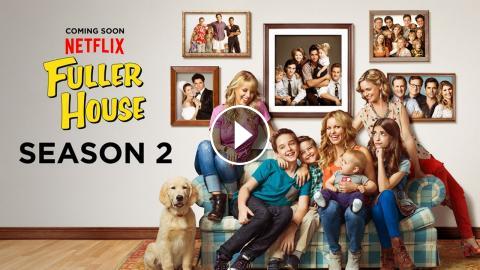 Thank you to T Mobile for sponsoring this episode. With double the LTE coverage you can know it all from almost anywhere. Click to see how: Full House...