admin
This video is brought to you by ‘The Age Of Adaline,’ in theaters this Thursday at 7pm!
14 TV Shows Gone Too Soon ►►
More Celebrity News ►►
And they always will indeed! San Francisco’s gettin’ a whole lot “fuller” as the Netflix spinoff to Full House is officially a go and I just can’t contain my excitement….
Today’s episode of Clevver News Feed is brought to you by the new movie The Age of Adaline - in theaters Friday!
So we know there were talks about Fuller House being a for sure thing, but now that the show has been green lit, the synopsis has been released, so I mean, it can’t get more real than this. As it should, the show will pick up where the original series left off in 1987, with veterinarian D.J. Tanner-Fuller, played by Candice Cameron-Bure pregnant and recently widowed, living in San Francisco. D.J.’s younger sister Stephanie Tanner, played by Jodi Sweetin and D.J.’s lifelong BFF/single mother Kimmy Gibbler, played by Andrea Barber, along with Kimmy’s feisty teenage daughter Ramona, all move in to help take care of D.J.’s two boys, J.D. and Max, and her soon-to-arrive baby. The title don’t lie, folks! It really will be a much “fuller” house…
As for guest appearances from other cast members, John Stamos is slated to produce the show and guest star, along with appearances by Bob Saget, Dave Coulier and Lori Loughlin.
The show’s executive producers Robert L. Boyett, Thomas L. Miller, and Jeff Franklin are especially over the moon about the return of the family, and released a statement saying QUOTE, “It is an honor and a thrill to catch up with these beloved characters and explore their lives today. The love you saw on the show was real. The cast has remained a loving family off screen all these years. We are as excited as our fans to finally bring Full House back to life.”
But wait, I think I’m missing one more very important family member….
Ahhh, of course, Michelle Tanner! SO according to the show’s official release, the 28-year-old twins Mary-Kate and Ashley Olson are currently in “discussions regarding guest appearances” soooo in Hollywood, that means yes, right?! Ahhhhh!!
Anyway, now that the show is officially a GO, what do you guys think about the return of the Tanners? Are you going to tune in to the new series and who are you most excited to see make their return to San Francisco?! Let me know all your thoughts in the comments section below or you can tweet me @DanaWardOnline to get the conversation going and then you can click right over here to check out 14 TV shows that were gone way too soon. Thanks for tuning into Clevver News today, I’m your host Dana Ward and have a #TannerTuesday.
For More Clevver Visit:
Website:
Like us on Facebook:
Follow us on Twitter:
Keep up with us on Instagram:
Add us to your circles on Google+:
Tweet Me: 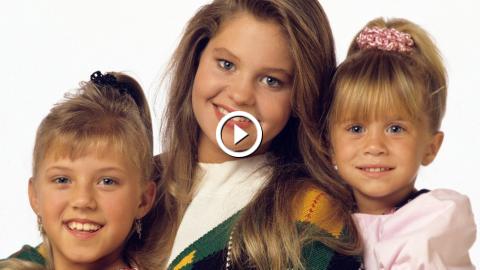 This video is brought to you by ‘The Age Of Adaline,’ in theaters this Thursday at 7pm! 14 TV Shows Gone Too Soon ►► More Celebrity News ►► And they a...