admin
Best TV Show Reboots & Reunions ►►
More Celebrity News ►►
Get excited, you guys, because the VERY FIRST photos of the newest Netflix original series Fuller House have been released and they’re givin’ us all those nostalgic feels.
You can take the family out of the home, but you can never really take the home out of the family, and after over 20 years, we have official proof that the Tanners are back to take on San Francisco.
The first glimpse of the Tanner clan reuniting was released last month by Netflix in the form of a teaser, however there was no sign of the family; just their voices as they were about to take the first steps back into their San Francisco abode… talk about a real teaser.
BUT we now have all the evidence we need that the family has reunited after photos from the set were just released last week and now the wait until the end of February is even HARDER to bear. One photo shows DJ, Kimmy and Stephanie in a tight embrace, just like the good ol’ days, with Danny, Rebecca, Uncle Jesse and Uncle Joey in clear sight, while the other photos introduce a few new members to the family, D.J.’s sons and Kimmy’s daughter.
However, one familiar face (or two, for that matter), we may not be seeing during the sitcom’s highly anticipated comeback is Michelle Tanner, played by both Mary-Kate and Ashley Olsen. After they were both confronted about reprising their role, they both turned it down, but exec producer Bob Boyett revealed that Mary-Kate was far less resistant than Ashley. He said QUOTE, "Ashley said, ‘I have not been in front of a camera since I was 17 and I don't feel comfortable acting. Mary-Kate said, 'It would have to be me because Ash doesn't want to do it, but the timing is so bad for us.'"
John Stamos even threw a bit of shade toward the girls, saying, "It was just like a family reunion where some of the family members didn't show up," but Dave Coulier offered a different viewpoint, saying, "I think they have a different perspective. When we get together and we reminisce, they were babies at the time. So they don't share those same memories. I can't really speak for them but I would understand why they don't have the same sentiments that we all do."
Understandable, but regardless of a major Michelle comeback or not, the entire Tanner family will be returning back to TV screens everywhere, and I personally can’t wait to get my binge on come February 26. So I want to know what you guys thought about the new Fuller House photos, are you even MORE excited now? And let me know if you’re secretly still holding out for Michelle’s return, and you can do all that right down here in the comments section. After that, don’t forget to click right over here to check out 8 of the best TV show reboots & reunions of 2015. Thanks so much for checking in with me here on Clevver News, I’m your host Erin Robinson and I’ll see you next time.
For More Clevver Visit:
Website:
Like us on Facebook:
Follow us on Twitter:
Keep up with us on Instagram:
Add us to your circles on Google+:
Tweet Me: 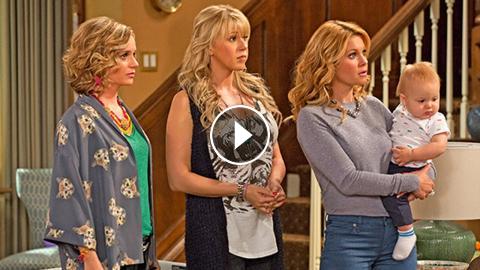