admin
This episode brought to you by T-Mobile, the network that doubled its LTE coverage in the last year. Join the millions who’ve switched
to T-Mobile.
Most Bingeworthy TV Show ►►
More Celebrity News ►►
The new trailer for Netflix's Fuller House is here, and get ready because the nostalgia is out of control
Today's episode of Clevver News feed is brought to you by T-Mobile, the uncarrier.
The gang is all back (plus some) in this new trailer, and we are pleasantly surprised at how many times we lol'd
DJ (played by Candace Cameron Bure), Stephanie (played byJodie Sweetin), and Kimmy Gibbler (played by Andrea Barber) were all couching it up on The Ellen Degeneres Show to debut the new trailer together but not before dishing about how the entire cast have kept in touch after all these years and how they are all just as close as ever before AND how everyone is in a group chat together but John Stamos is the only one without his own Bitmoji. 2016 problems
But the ladies also revealed that even though Mary Kate and Ashley Olsen are not currently signed on to reprise their role as Michelle Tanner, there is room in the show for them to join if they choose
And reference them they do because in this new trailer, there were a ton of Michelle references. But before we get to those - lets breakdown what's happening in this trailer - DJ is having a really hard time being on her own with 3 boys and the whole house finds out about all of this because they were being all nosy on the baby monitor. Stephanie and Kimmy step up to volunteer as tributes and declare that they will both move into the Tanner residence to help. And by the way, I hope Danny Tanner has done some additional renovations since the series ended in 95 because there are more people and kids than ever before. I mean, where are these people going to sleep?
We also see Uncle Jesse and Rebecca back together again and of course Uncle Joey too -
But some of our favorite moments in this trailer came from scene stealer, Kimmy Gibbler
So after seeing the awesomeness that is this trailer, what do you think? Do you think that Fuller House is going to be AS GOOD as Full House was? And are you marking your calendars for February 26th yet? I think you should because I am DEF gonna be watching. But lets chat about this in the comments, also if you're a Netflix fan, watch us battle it out on Debatable right here for the title of THE BEST Bingewortyh TV Show. Im Erin Robinson and I will see you next time.
For More Clevver Visit:
Website:
Like us on Facebook:
Follow us on Twitter:
Keep up with us on Instagram:
Add us to your circles on Google+:
Tweet Me: 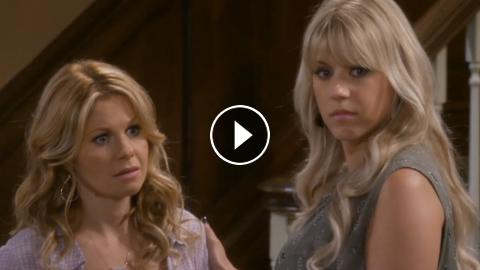 This episode brought to you by T-Mobile, the network that doubled its LTE coverage in the last year. Join the millions who’ve switchedto T-Mobile. Mos...