admin
This video is brought to you by ‘The Age Of Adaline,’ in theaters tomorrow night!
Fuller House Details ►►
More Celebrity News ►►
Netflix has given Full House spinoff “Fuller House” the green light, but the real question is, will the rest of the cast be making a debut? We’ve got all the scoop right now!
Today’s episode of Clevver News Feed is brought to you by the new movie The Age of Adaline - in theaters Friday!
That’s right guys, I’m sure you all know by now that the newest Netflix series Fuller House is a for sure thing, but the rest of the cast is still in talks to sign on to the gig, and yes, that includes Mary-Kate and Ashley Olsen who took turns playing the adorable Michelle. MK recently spoke out about the news during an interview saying QUOTE, “We just found out about it today. I guess we’re going to talk to the creators and see what’s happening. I’m shocked I haven’t heard from John Stamos.”
Ashley also chimed in revealing that she had QUOTE, “Ran into Bob Saget the other day and we didn’t even talk about it.” And although they didn’t rule out appearances on the show, I’m just wondering if they will do the old switch-a-roo like they used to or if they’ll have to rock paper scissors this one for the role of Michelle…
Another character, Aunt Becky, played by Lori Loughlin also weighed in on whether she thought that the Olsen twins would return saying, QUOTE, "It doesn't matter how much money they get paid, they don't care. I'm sure they're talking to them. Everyone would love it if they came back, it would be really nice."
Along with talks of an entire Full House cast reunion, Lori also explained what may be the turning point in her decision to join the cast. Take a look:
So ultimately, it comes down to closing fair deals for the rest of the cast, but as far as Lori was concerned, she explained that QUOTE, "We want to be there, we want to come back. It's up to them. It's not on us, it's on them."
But hey at least we have a go on the show, and Jody Sweetin who signed on to play her recurring role as Stephanie Tanner, is even more excited that she can finally spill the secret from their initial meeting with Netflix 6 MONTHS ago! That is a long time to keep a secret…. But of course it was well worth it!
So what do you guys think, will the Olsen Twins and the rest of the cast sign on to reappear in the new Netflix series and are you guys at all excited to tune in? It’s definitely a risky move, but if the entire cast is returning, it should be nothing short of amazing! But let me know all your thoughts in the comments section below and then you can click right over here to check out the plot details of the new Full House spinoff. Thanks for hanging out with me here on Clevver News, I’m your host, Dana Ward and as Michelle would say:
For More Clevver Visit:
Website:
Like us on Facebook:
Follow us on Twitter:
Keep up with us on Instagram:
Add us to your circles on Google+:
Tweet Me: 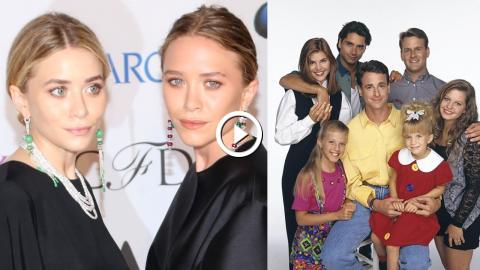 This video is brought to you by ‘The Age Of Adaline,’ in theaters tomorrow night! Fuller House Details ►► More Celebrity News ►► Netflix has given Ful...