admin
More Celebrity News ►►
A HUGE Harry Potter fan theory just got CONFIRMED in the final ‘Fantastic Beasts’ trailer.
We see you, Nagini!
The final trailer for Fantastic Beasts: The Crimes of Grindelwald just dropped, and it confirmed many fans suspicions that South Korean actress Claudia Kim is playing Nagini in the film. In ‘The Crimes of Grindelwald’, Nagini has not yet become the Dark Lord’s trusty slithering companion and prized horcrux, but is instead a human circus performer who, thanks to a curse, has the power to shapeshift into the snake she will later permanently become. Take a look at the trailer to see Claudia bring all kinds of dark magic to the role...
CLIP/AUDIO: Fantastic Beasts Final Trailer (0:25-0:35)
Many Potterheads theorized that Claudia Kim would be playing Nagini, but this finally confirms it. And now that the cat’s out of the bag, after a year of keeping quiet about her role in the film, Claudia can finally speak out about her character. The actress revealed that not only is Nagini NOT the kind of villain one would expect to later become the most evil wizard’s sidekick, there’s actually a softer side to the cursed character. Claudia explained TO EW QUOTE, “It will be so interesting to see another side of Nagini. You’ve only seen her as a Horcrux. In this, she’s a wonderful and vulnerable woman who wants to live. She wants to stay a human being and I think that’s a wonderful contrast to the character.”
In the film, Nagini can transform from human to snake at will, but as we know from the ‘Harry Potter’ books, there’s no way to save the human side of her -- and tragically, Nagini knows that she’s gonna eventually become a snake forever, due her permanent, irreversible blood curse. Finally, we’re starting to understand why that snake was so evil in all the Harry Potter books.
One thing Claudia still kept quiet on, is whether or not Nagini has OTHER powers, the way wizards do. The actress teased QUOTE, “She has powers that are yet to be explored...I can’t confirm she has powers like wizards have. And she doesn’t have a wand.”
I don’t know about you guys, but after hearing all this November 16th can’t come soon enough! So are you gonna see ‘Fantastic Beasts 2’ when its released in theatres? And what other fan theories do you have about the movie that haven’t been confirmed or debunked yet? Sound off with all of them in the comments below! Thanks so much for hanging with me, as always I’m your host Emile Ennis Jr. and I’ll see you next time!
Thanks for watching! Please click to the right to watch another new video and don't forget to subscribe to our channels.
For More Clevver Visit:
There are 2 types of people: those who follow us on Facebook and those who are missing out
Keep up with us on Instagram:
Follow us on Twitter:
Website:
Add us to your circles on Google+:
Tweet Me: 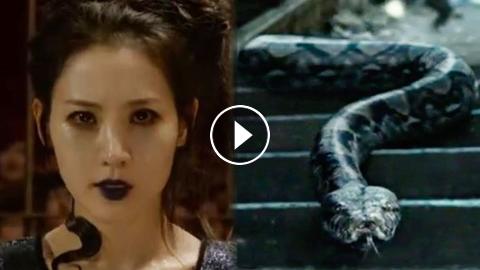