admin
Today’s episode is brought to you by the Un-carrier®, with T-Mobile ONE™. All unlimited. All in!
More Celebrity News ►►
Prepare to have your mind blown with this new Harry Potter fan theory about Snape’s death…
It’s been years since the Harry Potter books and films came out, but this new fan theory is so ingenious, we’re wondering why it’s only making the rounds now!
If you’re just getting into Harry Potter, then full disclosure: Spoilers are full-steam ahead…
But for the rest of us who’ve already finished the books and/or movies, prepare to have a major OMG moment...because this fan theory is claiming that Snape...dun DUN DUNNN!...didn’t die!!
As you’ll recall, in the final Deathly Hallows movie, Snape tragically dies from a bite from Voldemort’s snake, right after Harry finds out the Potions Professor has been his protector and ally the entire time. The fan theory--courtesy of a Reddit User named Der GottKaiser, gives a few pieces of evidence that suggest Snape did not actually die from the snake bite, after all.
One point the theory makes, is that in the scene where Harry uses the resurrection stone, his mother, father, Sirius Black and Professor Lupin come back from the dead to talk to him - but Snape is nowhere to be seen. Considering Harry just found out that Snape is one of the good guys who’s been looking out for him this whole time, you’d think he’d at least be worthy of a cameo in this moment, right?
Another argument the fan theory makes has to do with Snape’s body--after the huge, climactic battle at Hogwarts, all of the bodies of those killed are laid out on the floor--EXCEPT Snape’s. The fan theory explains QUOTE, “After the big battle, they lay out all the bodies, all the people who died, even the death eaters and Voldemort’s...but Snape’s body isn’t there. You’d think Harry would have told everyone about Snape’s sacrifice so they can find his body, too. But nope, Snape’s corpse isn’t found."
Hmmmm, very interesting. But the most compelling piece of evidence in this theory for us, by far, is the fact that Snape is supposedly killed by a snake’s venomous bite, despite the fact that he’s a Potions Master… Is that just some crazy dramatic irony, or has JK been waiting for us to figure out that Snape’s not really dead this whole time?!
On this hard-to-believe plot point, the fan theory notes QUOTE, "You think he wouldn’t have prepared for the possibility that Voldemort’s snake might turn on him? He was playing a dangerous role as a spy--Voldemort could turn on him at any moment; I think Snape would have obviously taken some kind of prophylactic antidote beforehand."
If a fan theory ever deserved a mic drop, this one most certainly does. And we really hope it’s correct, because Snape deserves to be out there somewhere, living his best life...
Okay guys, now I wanna hear all of your thoughts and theories on this new Snape revelation, so sound off in the comments below! I’m your host Erin Robinson, thanks so much for tuning in!
For More Clevver Visit:
There are 2 types of people: those who follow us on Facebook and those who are missing out facebook.com/clevver
Keep up with us on Instagram:
Follow us on Twitter:
Website:
Add us to your circles on Google+:
Tweet Me: 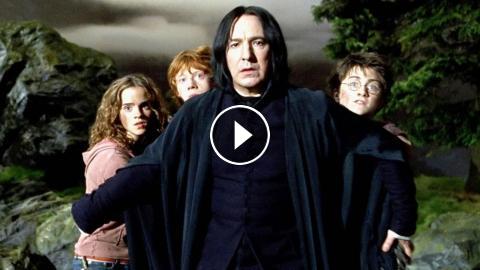 Today’s episode is brought to you by the Un-carrier®, with T-Mobile ONE™. All unlimited. All in! More Celebrity News ►► Prepare to have your mind blow...