admin
Thank you to Pandora Premium for sponsoring this episode. Listen Now at
More Celebrity News ►►
The Harry Potter world turned 20 years old yesterday, and celebrities were happy chime in with how the series affected them.
On the anniversary of Harry Potter’s first date of publication, well – all was well.
The Day of Celebration kicked off with a tweet from the Creator herself, JK Rowling, saying QUOTE 20 years ago today a world that I had lived in alone was suddenly open to others. It's been wonderful. Thank you.#HarryPotter20 with the new harry potter emoji.
The internet became flooded with the hashtag #harrypotter 20, with celebs and fans alike posting words of thanks, favorite memories and particularly salient quotations.
Daniel Radcliffe posted an intense recap of the whole saga to Instagram, and those Snape cameos gave us all the feels. The simple caption? “Until the very end. #harrypotter20 “
Another Potter darling, Bonnie Wright who played Ginny Weasley, posted a funny meme to Insta wit no caption, but with possibly one of the best geotags of all time, Kings Cross, Platform 9 ¾
Star of another world that took us all by storm, Shannon Purser who plays Barb in Stranger Things, directly thanked JK Rowling on Twiter, saying, “Thank you @jk_rowling for creating one of the most beautiful worlds I've ever had the pleasure of visiting. #HarryPotter20”
Even non-human celebrities got in on the Harry Potter fun. Viral pup Doug the Pug thanked Rowling from her biggest fan, “Harry Pugger.” Thank u for the magic u have given the world.
Fans, of course, contributed some of the most meaningful posts, with one writing, My only regret about reading Philosopher's Stone when I was 8 is that I'll never be able to read it again for the first time.
Another said, “I wouldn't be who I am or where I am today if it wasn't for a boy in a cupboard under the stairs. Thank you, @jk_rowling”
And the Award for most surprising #HarryPotter20 post? Without a doubt, Julianne Hough. The Dancing With the Stars champ posted THIS instagram post, captioning it Happy 20th Anniversary Harry Potter! QUOTE “Remember that one time when I was 11 and a Gryffindor? Oh and apparently liked flirting with the Weasley twins? #ivealwayslovedredheads#gryffindor #harrypotter #firstfilm”
Haha, I LOVE it! Lucky you, Julianne.
I spent Harry Potter’s 20th Anniversary fondly remembering how my summer camp counselor read my cabin a chapter a night from the Sorceror’s Stone and cuddled up with my personal favorite: book 3. Which one is your favorite and how did you celebrate? Let me know all your thoughts in the comments below, and of course, make sure to subscribe for more Clevver News. I’m your host, Zoe Lillian, and I’ll see you next time!
For More Clevver Visit:
There are 2 types of people: those who follow us on Facebook and those who are missing out
Keep up with us on Instagram:
Follow us on Twitter:
Website:
Add us to your circles on Google+:
Tweet Me: 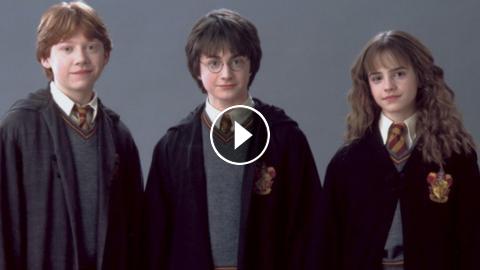