admin
More Celebrity News ►►
The Harry Potter Hogwarts castle is going to be a 6,020 piece set making it one of the biggest LEGO sets ever produced!
Not only is this LEGO set absolutely huge, the details are insane too!
The LEGO Set comes equipped with everything you know and love from the series such as Hagrid’s Hut, the Whomping Willow, and classrooms of course!
They even have a room for Professor Umbridge, who is almost as loathsome as Voldemort himself!
And no Hogwarts Castle would be complete with a “Great Hall” and this one comes complete with buildable stained glass windows!
There is also a Chamber of Secrets, which includes a BASILISK for a very creepy effect, and will make any fan of the 2nd book and movie super happy!
This castle has us shook - we don’t know if we can wait until Sept 1’s when it gets released
And get excited all you LEGO VIPs out there because you can order The Hogwarts Castle set in advance on August 15th
This pretty much gives everyone plenty of time to accio $400, because that’s how much this LEGO set costs.
It seems like everyone is releasing Harry Potter merch lately
Especially because this year marks the 20th anniversary of Harry potter and the sorcerer’s stone being released in the U.S!
And Lego is no different because this isn’t the only one they’re releasing because the toy company is also releasing a Hogwarts Great Hall set that is 878 pieces!
Although his Lego set is much smaller it still has plenty of details.
The Hogwarts Great Hall comes equip with minifigures to help you tell your favorite Harry Potter Stories
You can even get Professor Quirrel’s head to spin around into Voldemort’s head!
Lego and Harry Potter have created such a magical combo!
We know where we’ll be Apparating on Sept 1st!
But now we want to kick it over to you guys. What are your thoughts on this MASSIVE harry potter lego set? Let us know in the comments below. When you’re done with that click right over here to check out this EDIBLE cookie dough dessert at Disney!
For More Clevver Visit:
There are 2 types of people: those who follow us on Facebook and those who are missing out
Keep up with us on Instagram:
Follow us on Twitter:
Website:
Add us to your circles on Google+:
Tweet Me:
Tweet Me: 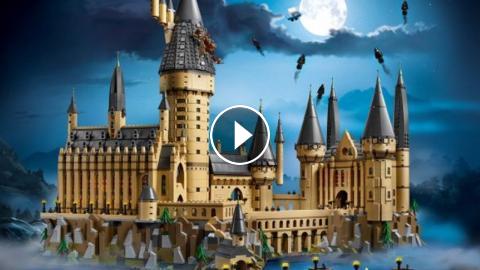 More Celebrity News ►► The Harry Potter Hogwarts castle is going to be a 6,020 piece set making it one of the biggest LEGO sets ever produced!Not only...