admin
More Celebrity News ►►
Millie Bobby Brown may be one of the most talented young actresses in Hollywood right now, but she’s also just a 14-year-old girl who understands how hard it is being a kid. So, when she heard about a fan who invited some of his classmates to his Stranger Things-themed birthday party only to have no one show up, she quickly stepped in to brighten his mood.
A girl tweeted about her little brother Aaron’s b-day party disaster over the weekend saying QUOTE “My brother invited 8 of his classmates for his stranger things themed bday party & none of their punk selves showed up.”
She also included pictures of him doing Eleven’s signature move in from of the Christmas lights from season one, the incredible cake and pitcher of “Demogorgon blood.”
The tweet quickly blew up, with countless people sending the boy love and support despite his friends’ cruel actions. And while I’m sure he was excited that thousands of people wished him well, there was one in particular that took the cake (no pun intended) — Millie Bobby Brown herself!
The British actress tweeted back QUOTE “What!!!! Oh Well You can let them all know that everyone on behalf on Stranger things would’ve come! I think your awesome and next year I would like an invite… Please?”
How sweet is that?! And the good news didn’t even end there! Gaten Matarazzo (gay-tin mat-a-rah-zo), the actor who plays Dustin Henderson on the Netflix hit, also chimed in to say he’ also wants to attend Aaron’s birthday bash next year.
He tweeted QUOTE “Count me in too! I’ll bring the chocolate pudding” and included a birthday cake, party hat and balloon Emoji.
It honestly broke my heart to see that none of the little boy’s friends came to his party, but hopefully Millie and Gaten were able to cheer him up. I know their kind words would put a smile on MY face! What do you think about the actors stepping in to lift the fan’s spirits? Do you think they’ll actually attend his party next year? Tell us your thoughts in the comments below and then click here to get the details about the Stranger Thing cast members’ MAJOR pay raise. I’m your host Zoe Lillian thanks so much for watching Clevver and I’ll see you next time.
For More Clevver Visit:
There are 2 types of people: those who follow us on Facebook and those who are missing out
Keep up with us on Instagram:
Follow us on Twitter:
Website:
Add us to your circles on Google+:
Tweet Me: 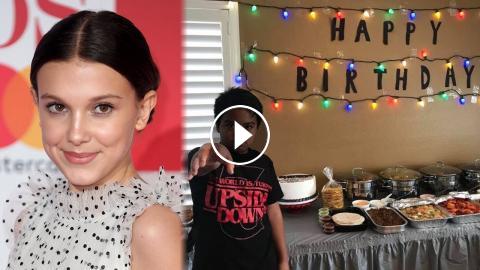 More Celebrity News ►► Millie Bobby Brown may be one of the most talented young actresses in Hollywood right now, but she’s also just a 14-year-old gi...