admin
Having visited Romania twice this year we've had ample time to sample a variety of different traditional dishes. While visiting Brasov, Transylvania we checked out a restaurant that specialized in polenta dishes. We ended up ordering the following:
Afinata (Bilberry Brandy)
Cotlet Dracula (Dracula Pork)
Mamalinguta cu branza si smantana (Polenta with cheese and sour cream)
Greek Salad
Goulash
Somloi (Sponge Cake)
To say this was a feast of feasts would be an understatement. It was one of those meals where we could have passed out under the table for a while ;) However, considering how much food we ordered the bill came in at only 73 Lei ($18 USD). An absolute bargain in our opinion.

Traditional Romanian Food in Brasov, Romania Travel Video Transcript:
It is dinnertime and we are at restaurant Transilvania. In Brasov and we are trying traditional Romanian cuisine. Let's go in and order some food. Yum!
So you've got yourself a fancy drink? Yeah, I'm just diving right in and trying things I've never had before. This is called afinata and it is a bilberry brandy. And, woah, it smells strong, so let's try a sip of that. Good stuff? Oh, yeah it is so sweet but yet it has like really high alcohol content. Is it like a syrup? Yeah, it tastes very syrup-y. That's a good way of describing it.
Well, very exciting times. My food has finally arrived. If you have a look down here I'm having polenta with cottage cheese and sour cream. And I also got some goulash on the side which I know is Hungarian but it was on the menu so 'hey' I got it anyway. So let's start with the polenta because that is very Romanian.
Look at that. Look at the cheese. Look at the sour cream.
Mmmm. Oh, wow. Is that good stuff? That's good. That's real good.
Okay, so tell us about your plate? Now on the menu I saw something I could not resist ordering. It was called Dracula pork. And if something is good enough for Dracula. It's good enough for me. So let's take a look at this.
It appears to be pork with some kind of sauce and like a copious amount of cheese. So it's like a melted cheese and maybe ketchup. Maybe it is Dracula's blood on your little pork medallion. Could be. Dracula's blood!
Would Dracula approve? I think he would. Yeah. That's really tasty.
And I ordered a side of polenta to go with my steak as well. So I'm going to try a bite. That's surprisingly tasty. I have to admit the first time I tried polenta, which was not that long ago, I didn't really like it. I thought gosh that is kind of bland. But it is really growing on me and if you haven't tried it before it's made out of cornmeal. And it has a yeah a kind of starchy kind of taste. You just need a good sauce on the polenta for it to taste good I think. Yeah, I agree.
And we ate all of this. How are you feeling? Bulging belly time.
You've tried quite a bit of Romanian food so far. What are your impressions? My impressions are that it is quite tasty. It's typical of other Eastern European cuisines in the sense that it is very hearty. There is a lot of meat, there is a lot of starchy foods like polenta and potatoes and there is something else that is really cool is that there is really good wine here. Wine here is fantastic.
What's your take on Romanian food? Well, I am stuffed beyond belief so I have to agree. Very hearty. Very filling. Um, I also think this is not a country for vegetarians. You see meat during every meal. During lunch and dinner. Especially pork. So, keep that in mind.
So even though we're quite full we couldn't resist ordering a Romanian dessert. So right here we've got sponge cake with chocolate pudding, chocolate sauce. I think it has orange cognac and whipped cream. And who knows what else. So let's just dig in. That's a huge portion. We're sharing this.
Mmmm. Wow. I wish they had given. Try that again.
I inhaled it. We're keeping this. We're keeping this.
I'm choking on dessert for eating too fast.
So is it like again? I was going to say. I wish they had given me a bigger spoon because it is so good. I want bigger bites. Bigger mouthfuls. But maybe that is not a good thing because I'm choking.
How much did that come to? That came to seventy three Lei. And when you convert that into US dollars it was only eighteen dollars. And keep in mind that was for three mains, three drinks and one shared dessert. I haven't had a meal that was that good of quality and that good of value in a very long time.
This is part of our Travel in Romania series. We're making a series of videos showcasing Romanian culture, Romanian arts, Romanian foods, Romanian religion, Romanian cuisine and Romanian people.
Proudly presented by: &
All photos and video taken by Samuel Jeffery (Nomadic Samuel) and Audrey Bergner (That Backpacker).
Music in this video courtesy of Audio Network 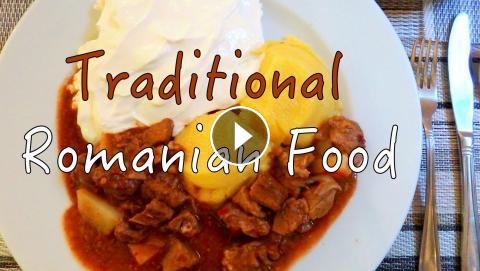 Having visited Romania twice this year we've had ample time to sample a variety of different traditional dishes. While visiting Brasov, Transylvania w...