Selena Gomez ADMITS She 'Loved' Being A Third Wheel In 2019!

admin
More Celebrity News ►►
Selena Gomez gifted all her fans and anyone keeping a close eye on her with a TON of never before seen photos and she legit outed herself as a “Third Wheel” master! I’ll explain!
What’s up y’all, it’s Emile Ennis Jr. here with Clevver News and HAPPY NEW YEAR!! We closed one chapter and an entire decade just two days ago and Selena Gomez is happy to close out a roller coaster of a year and decade!
On the first of the new year Selena uploaded a slew of never before seen photos she took in 2019 to her Instagram story!
Like these hysterical, non edited, authentic photos that I know we all take when we are bored! I’m not judging!
We know this past year was an emotional roller coaster of a year for Selena! We don’t want to bring up that past… but we have to because well that’s just what we have to do!
Her ex, Justin Bieber, had a very public wedding ceremony to Hailey Baldwin and we know there is definitely bad blood between the exes!
BUT selena prevailed and ended out the year triumphantly with 2 gut-wrenching and inspiring songs seemingly about her tumultuous relationship to Justin!
She even revealed what she was doing on that particular day, September 30th 2019! Sel shared these three photos from that day. She was hanging with friends, chowing down on some good eats and laughing!
Perfect way to spend the day when your ex celebrates getting hitched!
Another big moment from Selena’s 2019 She took the stage for the first time in years at the AMAs to sing “Lose You To Love Me” and perform “Look At Her Now.”
Selena was also tied to Niall Horan yet again this past year and despite being spotted walking into his LA home with a fruit basket… Selena and Niall both denied these rumors and Niall squashed them!
During an appearance on the “Brekkie Crew Podcast” Niall was asked point blank if he had a girlfriend since he was tagging Selena Gomez in multiple IG posts.
SEE VERY MUCH SINGLE! ALSO Selena admitted 2019 was the year of being a third wheel, so she definitely was not dating anyone!
Selena posted a photo from July to her IG story: “2019 year of being the third wheel … I loved it”
Honestly, it’s better to be a third wheel than be in a relationship that makes you feel single… or worse… like a third wheel!
Selena was also in a slew of weddings this year including her cousin’s wedding and her best friends wedding!
AND to really bring it home that she is doing fine as a single lady, third wheel, pop-star… Selena’s new album ‘Rare’ drops on January 10th! During a guest appearance on On-Air with Ryan Seacrest, Selena said, “It’s been four years since I’ve been working on this album. It’s actually perfect timing because I was going to release it two years ago. None of the words that I’m speaking would have existed so taking a moment to actually feel the feelings that I’ve gone through is just … I don’t know, I’m just so grateful that it’s out.”
It's been years since Gomez released her last studio album, which was her 2015 hit Revival. So, fans have been excitedly awaiting for some new music. "It's the most honest music I've ever made, and I can't wait for you to hear my heart," Gomez wrote on Instagram upon announcing the new album.
There’s a lot to look forward to in 2020… like Sel’s new album, future performances, a tour potentially… HECK maybe even a new love interest! But we aren’t here to pressure you Selena… you do what you want at your own pace! I’ll just be here rooting for you!
So now I’m going to turn it over to you! What did you think of Selena’s admission of loving being a third wheel? Also, did you like how she revealed what she was doing on the day of Justin and Hailey’s wedding Ceremony?! Any love interests you’d like to see Selena with?
Get to talking about it in the comments section below! Also, it’s a new year, new decade so if you haven’t already.. HIT THE SUBSCRIBE BUTTON and turn on the bell for Clevver News notifications! Let’s start this year off right. Then go ahead and click right over here for more entertainment news videos!
I’m Emile Ennis Jr. back on Clevver News and I’ll see you next time!
For More Clevver Visit:
Find us on Facebook:
Keep up with us on Instagram:
Follow us on Twitter:
Tweet Me:

Selena Gomez ADMITS She 'Loved' Being A Third Wheel In 2019! 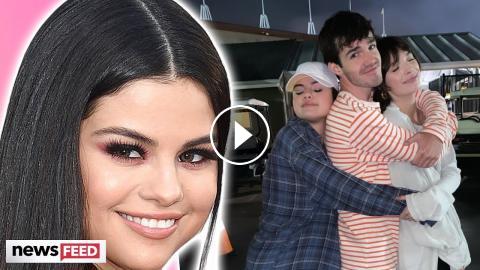 More Celebrity News ►► Selena Gomez gifted all her fans and anyone keeping a close eye on her with a TON of never before seen photos and she legit out...