admin
More Celebrity News ►►
During Obama’s era, he issued a protection over transgender students by making it a requirement that public schools allow transgender students to use the restrooms and locker rooms that corresponded with their gender identities to protect students from bullying and discrimination. However, Trump decided to get rid of Obama’s effort which now leaves the decision up to individual states whether or not to allow transgender students to use the restrooms and locker rooms that make them feel the most comfortable. In other words, there will be some trans students who will not share the same rights as other trans students in other parts of the country if their particular state doesn’t rule in their favor.
This of course resulted in an uproar on social media with many celebs coming to the trans communities defense to show that despite Trump’s actions, the trans community is loved. Katy Perry tweeted QUOTE – “Trans friend, if you are struggling tonight, please reach out to @TrevorProject and @Translifeline. Equality for all! #ISTANDWITHGAVIN.” Ellen Degeneres tweeted - “Just seeing the news about removing laws protecting trans people. This isn’t about politics. It’s about human rights, and it’s not okay. For anyone who feels scared or hopeless, know that we will never stop fighting for your rights.” Tyler Oakley tweeted - “we must #ProtectTransKids. this administration is attacking disenfranchised communities one by one. we must stand together for what's right.” Ariana Grande posted on instagram sayinf– “Protect Trans Kids.” Miley Cyrus posted step by step instructions about what people can do to help.
Jackie Evancho, who actually performed at Trump’s inauguration even spoke out against Trump’s action saying QUOTE - “I am obviously disappointed in the @POTUS decision to send the #transgender bathroom issue to the states to decide. #sisterlove @realDonaldTrump u gave me the honor 2 sing at your inauguration. Pls give me & my sis the honor 2 meet with u 2 talk #transgender rights.” Jackie has an 18 year old trans sister who is currently going through a lawsuit against her own school district over the right to use the women’s restroom at her school.
The celebrity reactions continued with Chris Evans tweeting - “To the LGBTQ community, I'm sorry for the message that was sent today. They don't speak for all of us. We love you.” Emmy Rossum expressed her frustrations as well saying QUOTE - “THIS IS EVERYTHING WRONG WITH THIS ADMINISTRATION. @POTUS ACTS OUT OF FEAR AND HATRED OF EVERYTHING HE DOESN'T UNDERSTAND. #RESIST” Laverne Cox posted her sentiments on instagram with screenshots of her speaking out on the issue saying QUOTE – “They’re about whether trans people have the right to exist in a public space. If we can’t access public bathrooms, we can’t go to school. We can’t work, we can’t go to health care facilities. And so, public accomodations are always key to civil rights.”
No doubt that we will continue to hear about this issue as the Trump administration’s decision unfolds. But I want to hear from you guys, what do you guys think about Trump revoking Obama’s protection over trans students? Let me know in the comment section below and then click right over here for a recap of Katy Perry’s performance at the Brit Awards. Thanks for watching Clevver News, I’m your host Drew Dorsey and I’ll see you next time.
For More Clevver Visit:
Keep up with us on Instagram:
Like us on Facebook:
Follow us on Twitter:
Website:
Add us to your circles on Google+:
Tweet Me: 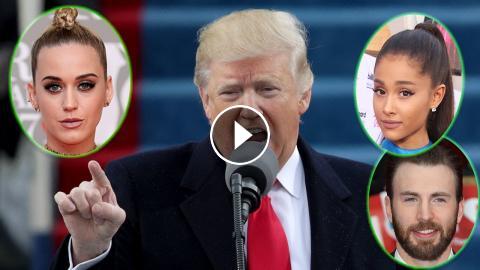 More Celebrity News ►► During Obama’s era, he issued a protection over transgender students by making it a requirement that public schools allow trans...